I will not complain about my vehicle. Besides the fact that it came to me for free (thanks Mom and Dad!) and got me through my two years of semi-exile on the Island of Beauty and Isolation by transporting me to and from the city every weekend, it has also endured a bit of a battering at my hands (I blame bad BC Ferries karma), has been lost for weeks at a time in the Kitsilano alley parking maze and has never once made a fuss.

The thing is, my awesome, gold Honda Accord is old, it is dying and it has no clearance. In short, when I want to go into the backcountry, or even up to the local ski hills (I can’t afford snow tires), I have to find a friend who can take me there.

When Colin and I broke up at the end of the summer, I was determined not to let that limit my outdoor activities. I knew I had other friends who like to do the same things, and I knew I could learn how to make plans before the morning of -plans that were clear enough that everyone ended up at the same place, at the same time. But what I didn’t factor in was the truck.

Colin has an amazing FSR-crunching, rock-crawling, river-fording machine that could get us pretty much anywhere. We only hiked from the trailhead because we enjoyed hiking. He probably could have driven us to the peak if he’d wanted to. He spent many (many, many) hours building it up, adding and removing parts, improving suspension, raising, welding and bolting. There was a period of time that I considered myself a truck widow. During that time, I could have explained to you what locking diffs are, and how a truck snorkel actually works. And while the beast looks a little funny in the city, it can sure take you places in the backcountry.

Not so the Honda.

I had wanted to become a more independent mountain woman. I had planned on getting out there, even if I had to go on my own. I had intended to prove to myself that I could run a trip without assistance -figure out how to navigate a winter route without following someone else’s tracks. But in order to get there, I have to ask for a ride.

I’m not good at asking for things, but I’m working on it. For me, that takes courage too. But the more rides I have to ask for, the more wilderness fun times I know are dependent on someone else being able to come along (or on me being able to tag along with someone else), the more awesome people I get to spend quality time with.  If I had a 4-wheel-drive, snow-tired, roof-racked beauty with a not-dying transmission, I would be spending a lot more time on my own in the mountains. And that would be a shame. I love my alone time with nature, don’t get me wrong. But the busier and more family-oriented the people around me become, the more precious our time together is. And I can’t think of a better way to spend time with a person than on a mountain somewhere, breathing it in. 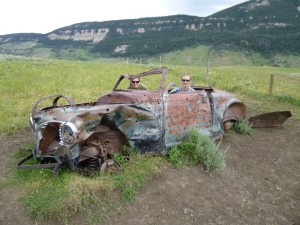