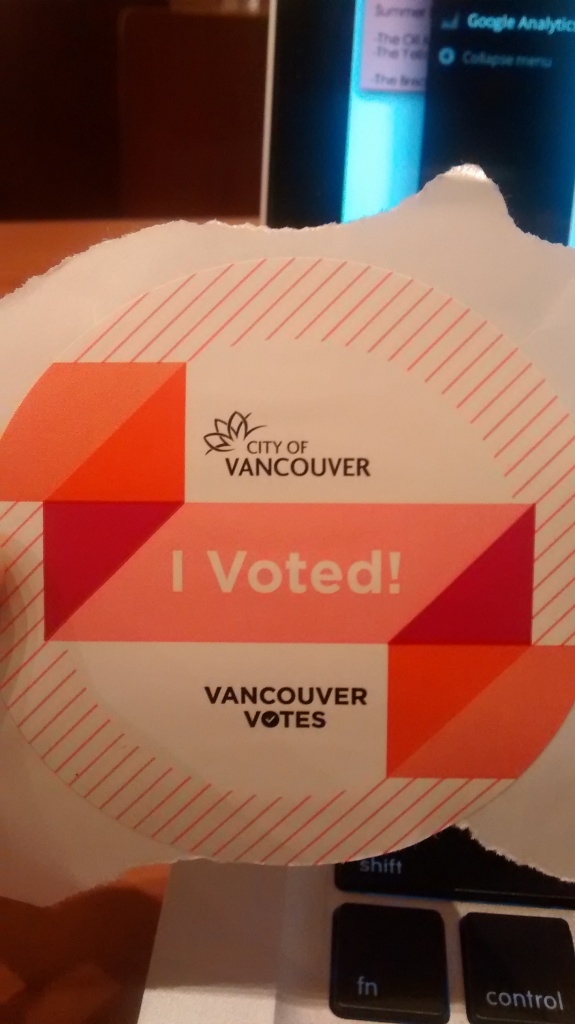 I’ve lived in Vancouver (on and off) for ten years. I was a wide-eyed 21-year-old when I got here. My big ambitions were to have a world map on my wall and to find people to throw a frisbee around with between classes; I actually wore Thai wrap pants with crocs (yes, in public) and I had to call my mom to tell me how to boil an egg. I thought I could survive on soy nuts and plain pasta. I’ve come a long way.

Today, I voted in the municipal elections. I’ve never done that before, ever. I’ve always found it completely overwhelming, there being some 27 different seats to fill, and it’s only been very recently that I’ve payed any attention at all to city hall.

Apparently, I chose the year that everyone else did to exercise my right to vote.

Luckily for my poor brain, a friend of mine organized an election research party, and a couple of people there actually knew what they were talking about. There was a handy online tool that allowed you to read each potential council member’s blurb and select the ones you like best, then have your choices emailed to you.

After hours of reading, internal debating and eating chips, I had my carefully selected 27 choices.

So today, I showed up at the local voting station, a little catholic school with children’s drawings of birds on the walls and a big concrete-and-rebar expansion-in-progress outside, and got in line. The lineup extended outside and across the sidewalk, and I joined my fellow voters with my choices firmly in my phone. As an elderly British woman befriended her third fellow line waiter, I looked around at the diverse group of people in front of and behind me, many of whom I would never encounter in my every day life. The couple in front of me lightly discussed energy healing and rock concerts. A tiny elderly man with a shock of a white beard waited on a couch for his even tinier wife.

Then I noticed the sign prohibiting phone use while voting. I spent the next 20 minutes or so as I waited alternating between solitaire and trying to memorize my 27 choices. And I’m proud to say, I only forgot two.

Next time, maybe I’ll get them all.