What does eating raw tuna have to do with fracturing a vertebra? I’m not sure, but life rarely gives us clean narratives. If I were writing the story, I wouldn’t have conflated the two. All I can say is that I did both, for the first time, in the same evening, and that the Eating of the Tuna, as it shall henceforth be known, came up more than once while I was lying on the beach with my friends/heroes, wondering if I had, in fact, broken my back , and if so, how I could possibly still swing climbing in Red Rocks next week. 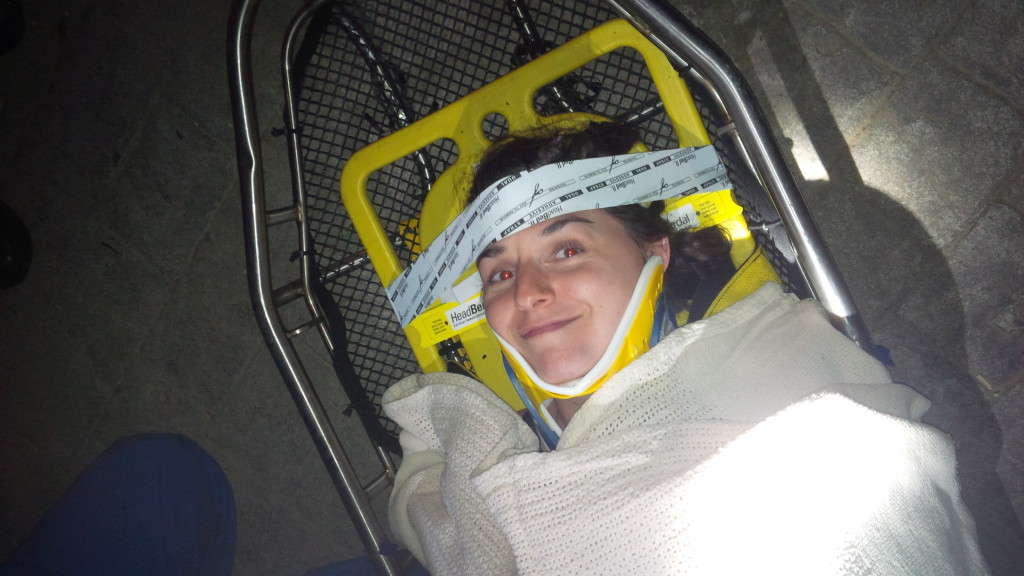 Truth be told, if you can look past the whole substantial amount of pain/immobility thing and the fact that my incredibly witty and entertaining friends were actually trying to distract me from a pretty intense situation, and were probably at least a little bit concerned about what might be wrong with me, it was a pretty good time. I mean, who doesn’t love spending an evening on the beach at the cusp of summer?

But back to the raw tuna.

I had tagged along with a friend to Sooke, a pastoral community on Vancouver Island that’s a short drive from some nice surf spots. So far, we had avoided surfing by stopping in at multiple coffee shops, going for a walk on the beach to “check out the surf”, visiting a flea market and a garage sale, and making sushi for dinner. As happens every single time I eat sushi, someone suggested I try the spicy tuna.

I have nothing against seafood. I’ve always wanted to like it. But I don’t. I hate it. I typically have to douse it in strong sauces and swallow it while plugging my nose and fighting a gag reflex. I can’t tell you how many times I’ve been lied to about something “not tasting fishy”. Let me tell you something, seafood lovers: it does. It does taste fishy, and it’s gross. And please don’t ask me, with that shocked and hurt expression you all seem to have mastered, WHY I don’t like it. Why don’t you like cottage cheese, or Pina Coladas or the colour orange? You just don’t, right? Also, I KNOW it’s good for me. If I could change, I would, but I can’t. So please shut up now.

So normally, whenever I have sushi, and whoever I’m with eyes my vegetarian selection doubtfully while asking if I’d like to just try the spicy tuna roll, because I’d probably like it, I decline. Except Saturday night, I didn’t. I don’t know why.  Maybe it was because the tuna was given to our host that afternoon by a very friendly neighbour, and had a good vibe. Maybe my curiosity got the better of me (again). Maybe I was subconsciously craving the rush of doing something foolhardy and unlikely to produce a great deal of enjoyment. Whatever the reason, when it was suggested to me that I try the spicy tuna, because it was really good, and didn’t taste fishy, I went for it. Without the usual hesitation and nose-holding, I just opened my mouth and shoved a whole piece right in there. I wouldn’t say it was really good, but I didn’t have to gag or plug my nose, so in my fish-hating books, it was a raving success. I even ate another little piece, all on its own, for the photo op.

I didn’t realize just how many more pictures would be taken that evening. In fact, starting with the tuna and finishing with a CT scan, the whole night was a bizarro world of unusual things happening in pretty nonchalant ways. It’s not like I expected a troupe of dancing half-man-half-unicorns to usher in the the weird goings-on with a jazzy tap number, but a little more fanfare would have seemed appropriate. In the end, though, what I’ve always appreciated about moments of truth, whether of the culinary or health scare variety, is the extreme practicality of them. There just isn’t room to think about anything else. When I ate the tuna, I was mostly focused on swallowing.

I might have started out on our after dinner “digestive walk” wondering how I would tag an extra 4k onto the 10k we were all going to run the next day, while simultaneously craving an ice cream cone and worrying about my caloric intake that weekend, (and what it would all mean for my prospects in terms of climbing in a sport top in Nevada next week should the heat get bad enough), but one misstep on a beach trail switchback, and I was catapulting towards the beach several meters directly below, then landing on my ass, then trying to figure out if I was able to breathe, or to remain upright, or to move at all. And the rest of the evening was mostly taken up with trying not to hurt too badly. That was it. Just, “I wonder if I can move some of the gravel out from under my lower back,” and, “Hm, I seem to be shaking uncontrollably -weird. I wonder if someone will bring a blanket.”

The beauty of being the injured party is not actually having to worry about any of those things because, well, you can’t move anyway. My friends, and also the paramedics and most of Sooke’s volunteer fire department, did all the work, which ended up being almost SAR-like, to my fascination and mortification. While the fire truck ladder was stretched out over the beach to provide lighting, at least 4 or 5 firefighters (including our friends’ landlord) stabilized me, wrapped my neck (and half an ear) up snugly in a brace, and strapped and taped me to a basket stretcher, which they then carried through the high tide and up a path to the ambulance, where the paramedics took over. I don’t remember everyone’s name, but I do remember that one firefighter had a moustache that nearly changed how I feel about moustaches as a whole, and I had to talk myself out of mentioning it to him.

Nurse Nate took over at the hospital, providing me with pre-warmed blankets (what kind of heaven is that?!), which I appreciated enormously, since the paramedic had somewhat awkwardly cut off my shirt in the ambulance -another one of those new experiences that, like the laughing gas that didn’t even make me laugh, turned out to be pretty mundane.

During the night I spent at the hospital, mostly in a Dilaudid–induced haze, time passed abnormally quickly, punctuated only by a screaming drunk man in the early morning and very few deep thoughts (except a brief foray into philosophizing about death, which was interrupted by suddenly falling asleep for a couple of hours). It was downright peaceful.

But then, hospitals have always felt like sanitized, funny-smelling sanctuaries to me. I know most people hate them, and I was more than happy to get out of there when the time came, but if you have to be there, you might as well just let go and let Nurse Nate bring you another warm blanket. Tomorrow will come, along with figuring out what to do about the broken back thing, but for now, it’s enough to know I’ll be fine soon, and in the meantime, I’ve got plenty of love to be getting by on.

Note: Since I’m the only person whose thoughts I have access to, this story is from my perspective. It should really be about my friends, Jenya, Kira and Nam, who kept me warm while they froze, ran to get help, kept the mood light and stayed with me in the (inconveniently far away) hospital all night, drove me to the ferry in the morning, carried all my stuff, then drove me home to Vancouver (the opposite direction from Squamish, where Jenya lives). It should also be about the volunteers at Sooke FD, who were incredibly kind and communicative (on top of possessing a perfectly manicured moustache), and got their feet wet carrying me through the ocean and up the trail, as well as the paramedics who drove as not-bumpily as possible and gave me laughing gas, and Nurse Nate, who made sure I always had enough blankets, and that I wasn’t forgotten about. 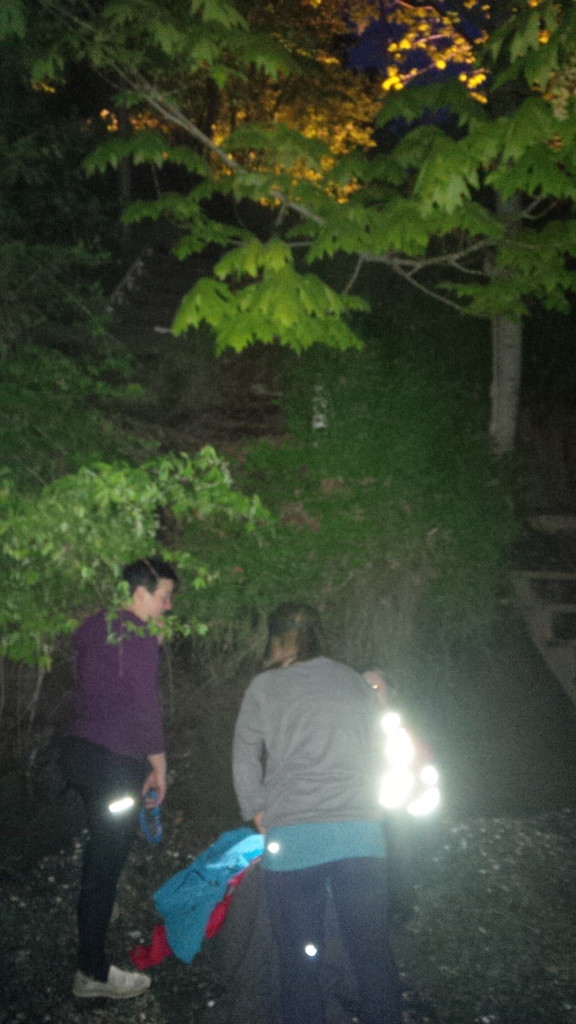 The girls gave me their coats while Nam ran to get help. 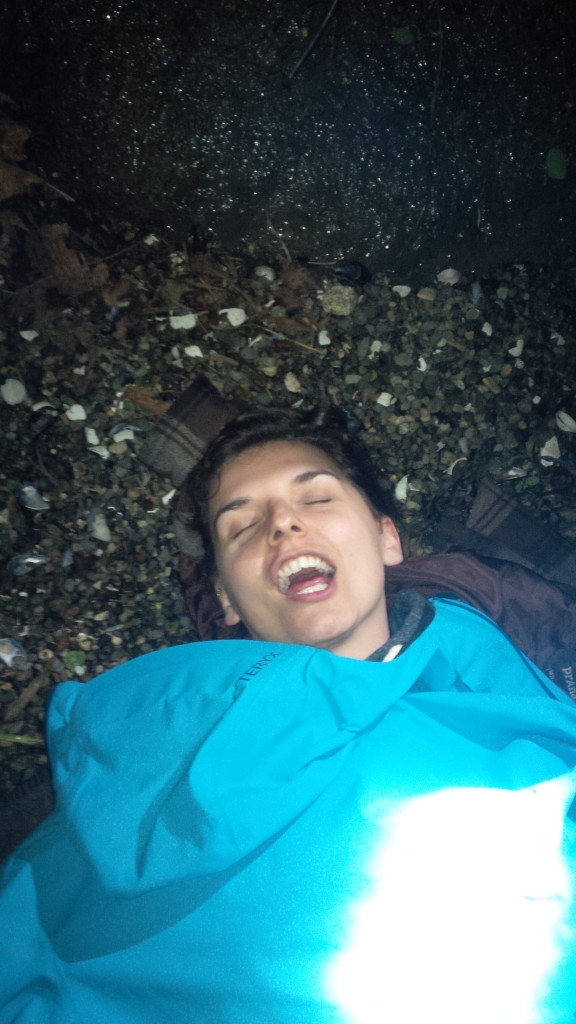 For some reason, I thought it would be funny to pretend to be dead for the camera. 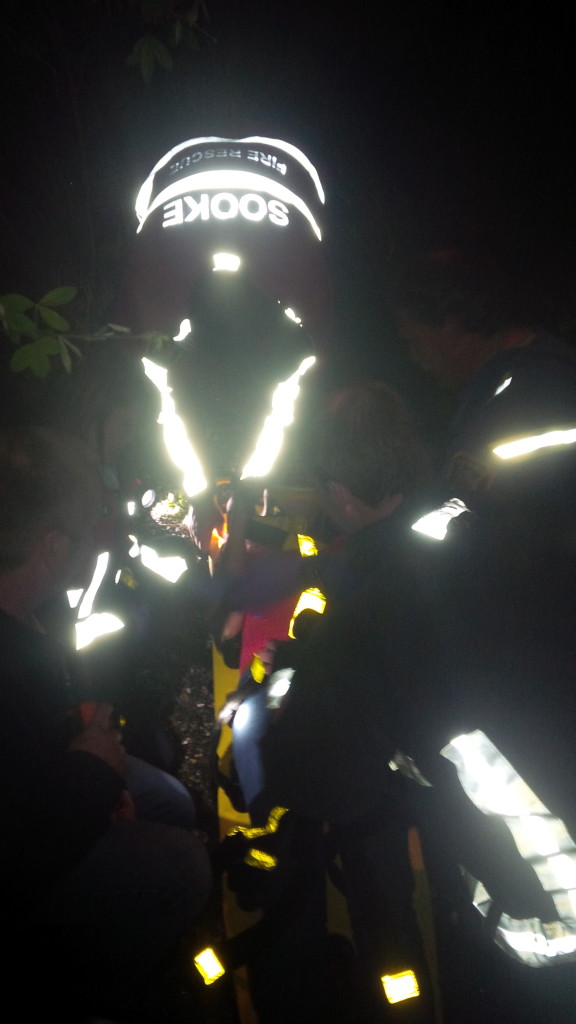 The Sooke FD strapped me in nice and tight. 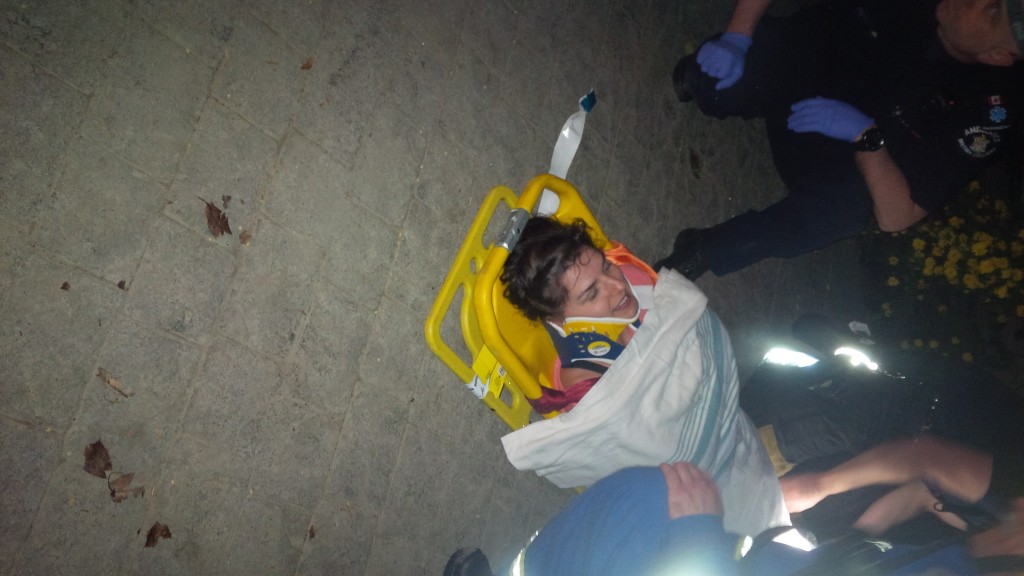 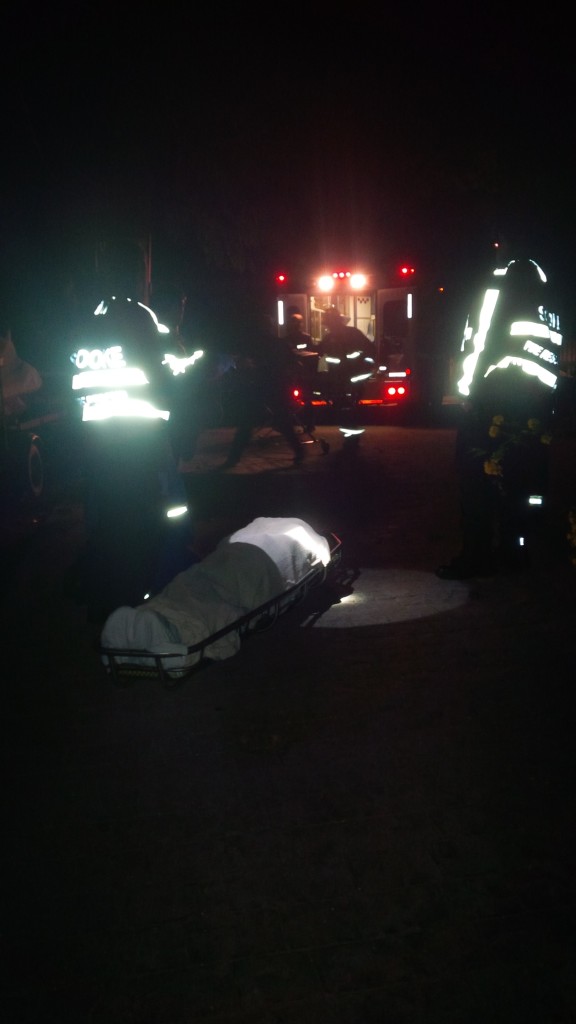 I spent a lot of time on the ground outside of the ambulance. 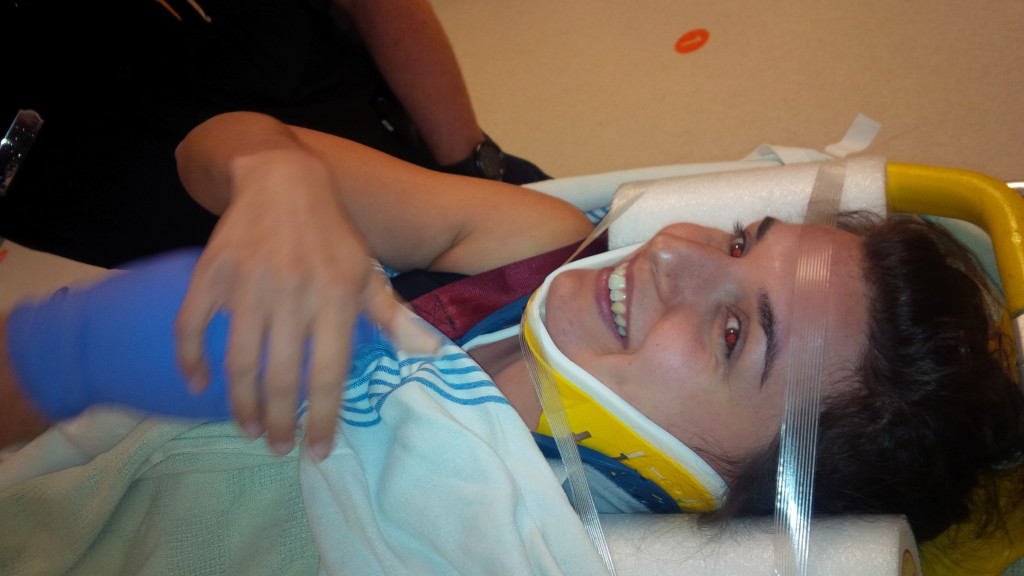 They taped some foam to my head and sent me to the hospital.