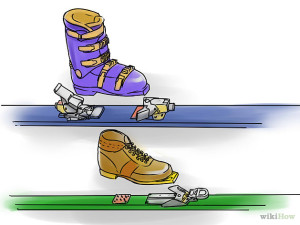 One of the best things about living two blocks away from the beach (besides, of course, the beach) is the amazing view I get of the North Shore mountains every time I step out of my apartment building. Today, I was greeted with a rare and beautiful sight -snow! Snow, snow snow!

So hopefully this is a sign of things to come, and the ski season can finally get underway. In the meantime, though, I promised some alternatives to taking chunks out of your rock skis while carving slush. This one comes courtesy of my friend Tara, who is amazing at everything, and has been avidly skate skiing this year.

Last weekend, she took a bunch of us noobs up to Callaghan and patiently led us on a beautiful circuit of the park. We stuck to the green trails, of course. Yes, cross country ski trails come in green, blue and black, just like their alpine counterparts. And before you start to mockingly wonder what a black trail in a relatively flat sport might look like, just imagine how your typical alpine green run might feel on a pair of glorified pencils, attached to your toes with a paperclip. You don’t appreciate edges until they’re gone, as the saying (sort of) goes. Needless to say there was a lot of flailing, loss of control and bruising that day, and more than a few angry glances from the serious skiers who actually knew how to do things like turn and go in a straight line.

There was also a lot of laughter, great exercise, and, in my case, gratuitous grinning. Not to mention a REALLY cute biathlon instructor. (Unfortunately, the only attention-getting tool at my disposal was my ability to stumble around in a crazed, drunken sort of way, so I believe the interest may have been one-sided.)

If you have $50 or so dollars to spend on a pass and rentals, a friend who knows what they’re doing to drag you around, and a half day to kill, skate skiing is an awesome way to get out on the snow when there is very little snow. I would definitely do it again. Next time, though, I will not send one friend to the Whistler Olympic Park by accident while the rest of us are at Callaghan Country. There are, in fact, two rental places, at two seperate parking lots. Beware.