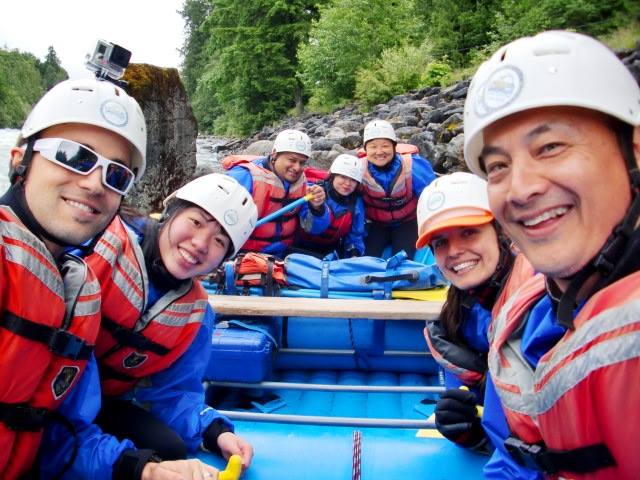 The first time I tried whitewater rafting, at the age of 19, somewhere in the no-man’s-land between Ontario and Quebec, I discovered my inner selfish jerk. I had always hoped that in a life-or-death situation I would be the heroic one, valiantly risking life and limb to save others. Instead, when half the people in my raft were thrown overboard in a narrow, tumultuous bit of class 4, and I got stuck under the boat, I found myself grabbing at anything and anyone that offered a solid grip and pulling as hard as I could to get to the surface. Heroism and other people’s lives be damned -I needed to breathe. I’m still a bit uneasy about what went down that day.

This Monday, thankfully, I didn’t have to learn any other difficult truths about the strength of my survival instinct. (I was, however, reminded of the power in my lungs). I also learned this important fact: whitewater rafting, or possibly, doing anything at all, is WAY more fun with a group of feisty bloggers. When I woke up the next morning with sore ab muscles, I wasn’t sure if it was from the paddling or the laughter.

By the time we pushed off into the Chilliwack River, guided by the experts at Hyak River Rafting, and suited up in their super-attractive (and also toasty warm) farmer johns, spray jackets and life vests, dozens of photos had already been taken and tweeted, several hundred jokes had been made, loudly and irreverently, and I already felt I had made 14 new friends.

And then there was the rafting. I have been to some beautiful spots. I have climbed mountains and taken in 360s of snowy peaks as far as the eye can see. I’ve stared out at endless ocean in stormy weather and up into red- and yellow-leafed birch trees during Ontario autumns. I’ve seen some beautiful places. And the Chilliwack holds its own, from low-lying alder groves to evergreen-carpeted hills jutting up from the banks. I couldn’t get enough of the view, or the sense of brooding west-coast beauty, as bald eagles swooped over the low-hanging clouds that clung to the mountainsides.

That was during the calm sections. Then there were the class 3 and 4 rapids, most of which I experienced by screaming loudly, paddling when I was told to, clinging desperately to the raft and getting face-washed by the river. It was awesome.

(To get a first-person perspective of what went down (feel the water in your nostrils!), watch this little vid, created by one of my new friends. See if you can catch a glimpse of the orange hat -that’s me! The blood curdling screams that can be heard throughout are also me.)

A lot of my adventures are adventures because they pull me out of my comfort zone. They’re difficult experiences or new ones, and frequently involve an exhilarating kind of beauty. But I tend to avoid adrenaline. I usually prefer the gentler, longer-lasting high that endorphins provide. I forgot how awesome a head rush can be. Especially one that lasts for four hours, with breaks for lunch and hot chocolate (provided by Hyak), and hanging out under a waterfall (which I was told is half-fed by a hot spring, but I’m not sure I believe it).

So, here’s the part that’s new for me (and great news for you!): I’m giving away a free rafting trip with Hyak!! In fact, in conjunction with the other bloggers who were on the trip, there are 15 rafting trips to be won. The more you engage, the more entries you get. And trust me, it’s worth it! Click below to get started!
a Rafflecopter giveaway