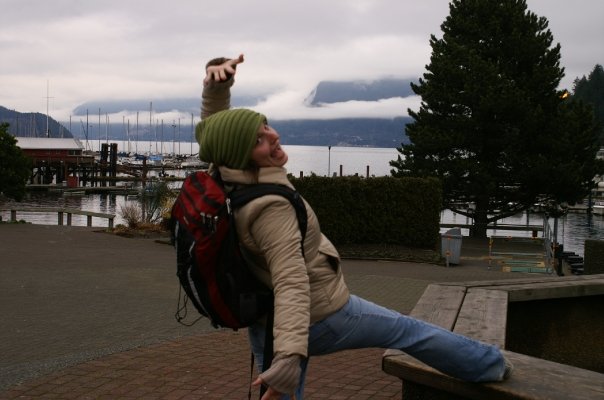 Not a broken foot, but taken around that time. Note flared jeans and style of MEC backpack.

I never really TRIED HARD at blogging until becoming The Girl, but I have been keeping blogs (and journals) for a long, long time. I hate to think of what’s floating out in cyberspace that I placed there and then forgot about. Recently, a friend introduced me to Mortified Nation, and we spent the next two days texting tidbits to each other from our tween diaries. This will be a bit like that, only with fewer mentions of Jonathan Taylor Thomas.

This week, for #TBT, I have a post from my cycling blog (which contains 5 entries) that I began when I began cycle commuting, many years ago. It is about cycling with a broken foot, and I post it in honour of the run I did yesterday with a (sort of still) broken back. Some things don’t change.

Yesterday, I biked home from work for the first time since breaking my foot.  It actually went pretty well, despite a couple of clumsy moments and looking kind of wierd with one regular-sized foot and one colossal air-cast-encased foot (well, that’s nothing new, at least).

I’m glad I waited until the swelling and pain had subsided considerably, rather than setting out on day two, as was my original plan.  Standing down at lights was pretty jarring and would have been really painful a week or two ago.

But it was surprisingly easy to pedal with the moon boot.  Actually, it was almost easier than without.  With the pedal positioned just right under the balls of my foot, I was able to transfer a considerable amount of power from leg to bike without using my ankle or foot muscles at all.

The last major obstacle of the ride was carrying my bike down the stairs to my apartment.  That was ungraceful at best.  I banged up my knee a bit with an unsteady lift and there was barely enough room in the stairwell for the bike and me, with my rocking stair-descent-in-moon-boot motion.