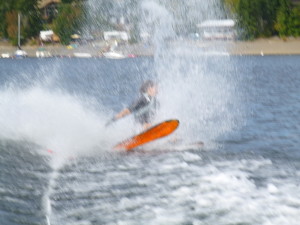 A few weeks ago, I was walking the streets of Kitsilano with a friend who was in the midst of a Difficult Life Situation. We were looking for a late dinner, but it was after 10, so nothing at all was open, except for the Safeway. (We opted for frozen chicken fingers, in case you’re curious). Being the awesome friend that I am, I was babbling on about my own problems, and being the awesome friend he is, he gave me the best advice I’ve had all summer.

I was about to start physio again for my broken-back pain, which I had believed would be better a long time ago, but which hadn’t perceptibly improved in at least a month. In June when, because of the broken back, I had cancelled my trip to Iceland, I had consoled myself with imagining all the things I would get to do locally, which I’ve been missing out on in recent years with all my summer travel: scrambling, climbing, trail running, cycling. The problem was, all of those things involve a healthy back.

My last physio appointment, over a month earlier, had been full of excitement; I was excited because I had been climbing and dancing that week without pain, and was about to go on my first hiking trip of the summer. The physio was probably excited to get me out of his hair. We agreed I could stop coming in.

Now, it was nearly midway through the summer. I hadn’t done any of the things I had planned on doing. Everything hurt. And I was going back to physio. It felt a lot like failure. I explained my unease to my friend, who is more or less an expert in hanging in there. His advice? Think of the physio appointment as a fresh start. The beginning of something better, rather than a partway point in a slog of undetermined duration.

Good advice. And it applies to more than broken backs. I’ve been trying to stop eating sugar because it makes me sick. Except it is also probably my favourite thing after puppies.  So every day, I tell myself this is the first day. Because chances are, yesterday, I caved and bought an ice cream cone. But letting yesterday’s failures justify the failures of today is a recipe for, well, failure.

I’ve been working on an essay about some of the problems I had in my mid-20s. I made a lot of mistakes. And I’ve made a lot of decisions since then that reflect my fear of making those same mistakes. These days, I am trying to make decisions that make me feel more alive, rather than decisions that lessen any residual fear I might have lingering in my stomach. Because of what I’ve been through, I still sometimes feel as though things will never change: I will never be anything other than what I was, I will never stop making the same mistakes, I will never become what I want to be.

But I think, actually, that there’s hope. According to the Ontario Tobacco Research Unit, it takes an average of 30 attempts for a person to quit smoking. 30 sounds like a lot, but think about what that means: Did you give something a shot and fail? Maybe you told yourself you were going to start doing yoga and stopped after two days. If you’re anything like me, even if doing yoga every day is your life’s dream, you’ll probably tell yourself, after this one failure, that it’s not going to happen, and you should just settle for being a less flexible version of the person you would like to be. Maybe you’ve tried three or four times. Maybe, like me, with every new ski season that rolls around, you tell yourself, this year I’ll ski a black run, and then you chicken out -again.

But just because it didn’t stick this time doesn’t mean the next attempt won’t be the last you’ll have to make. Success isn’t built on first tries. The original draft is not what gets published.

I know this is old wisdom, but it helps to be reminded once in awhile that my failures don’t amount to anything greater than anyone else’s, and that what I couldn’t do last time can’t necessarily predict what I’ll be capable of this time around.

So, you’re 31 and worried you’ll find the same problems in your next relationship that you created in your last one. You think you might take the easy way out of building the career you really want because you’re getting tired. It’s more than halfway through the summer and all the hiking and climbing and writing you planned on doing seems like a regret to save for autumn.

Can you let that go? Make today the first day, and go from there.