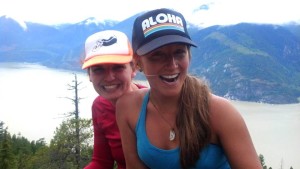 I’ll admit it: when I first heard about plans to build the Sea to Sky gondola in Squamish, I was not ok with that. It seemed like a poor man’s Grouse Mountain Skyride designed as a desperate grab at tourist dollars destined for Whistler. At best, I thought it would overcrowd the Chief with people who hadn’t actually hiked there. At worst, I was concerned it would fail to make money, and become a purpose-less eyesore. Not to mention the development would happen in a provincial park. (And we all know how I feel about BC Parks.)

Well, the gondola opened this weekend, and, like the 2010 Olympics, beating them wasn’t an option, so I joined them. And I have to say -the view from the other side of this issue is spectacular.

After a month of Very Light Activity, I wanted to try a hike. Since I’d also wanted to check out the gondola, and a friend of mine who lives in Squamish had been up and really wanted to go back, we decided to hike up to the gondola, then ride it back down.

We started at the Chief parking lot, taking the trail through the campground and up the stairs, and turning right towards Shannon Falls where the trail forks. The Shannon Falls trail is now clearly marked with big, green “Sea to Sky” diamonds, so it’s easy to follow. We took that trail to the top of Shannon falls, and then up towards the gondola platform, occasionally passing under the cabins as they carted smiling, waving people back and forth. It was a beautiful and varied trail, offering all the west-coast favorites: big trees, big granite, big ferns, mosses of every kind blanketing it all, and cool, clean air. We followed the trail, which was sometimes rocky, sometimes root-covered, sometimes mossy, uphill and along flat sections, through an aspen grove and across fresh-cut clearings. There was more than one gorgeous view of Howe Sound.

Eventually, we reached a newer portion of the trail -with maps featuring the trail system around the gondola platform. With two options, we chose Wrinkle Rock trail, which took us past the new climbing development of the same name. Wrinkle Rock crag looked small but pretty uncrowded, with the potential for some stunning scenery at the anchors.

In all, with a whole lot of stops to accommodate my still-healing back, we arrived at the platform in just under 3 hours. We celebrated with salads a chocolate croissants from the cafe, enjoyed on the sunny patio offering a vista of Howe sound in one direction and Skypilot and Habrich in the other. Among the other “tourists” were families with small children, a party of climbers who had just come off Skypilot, elderly folks, big families, a mother and daughter who had also hiked up, and many others, from all walks of life.

After our lunch, we followed a well-manicured (read: wheelchair accessible) path to a lookout where we could see all three peaks of the Chief, and the tiny hikers wandering around on them (at a safe distance from all us tourists). Being able to see a spot I’d been so many times from this new perspective was pretty cool.

There’s something to be said for this kind of development: now people (like me, at this point) who couldn’t normally make it up and back down on their own steam, get to enjoy the fresh air and scenery. Ok -a lot of the people who had taken the gondola up were physically capable of doing the hike -but how many would have? Maybe affording them the opportunity to enjoy this area and this view isn’t so much selling out as encouraging appreciation.  And we are more likely to want to protect what we appreciate.

The Sea to Sky Gondola and its accompanying chalet/patio, suspension bridge and trail network are all pretty unassuming and tastefully done. Sure, there’s a gift shop on either end of the line, and people with cameras taking photos that you can purchase later, but it’s certainly not the obnoxious tourist trap I imagined. And the access to more hiking, climbing and mountain biking is hard not to appreciate. For a download fee of just over $10, we rode down in one of the small cabins, looking out the floor to ceiling windows at the trail we had just hiked and freaking out over just how steep the ride was.

So yeah, I’d say I’ve come around on this one. In all, it’s a totally worthwhile trip.