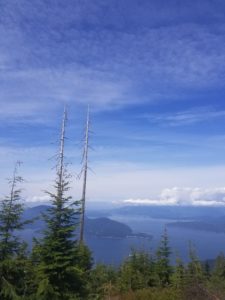 View from the new summit.

I am not a risk-taker. Despite it being extremely obvious, it’s taken me 35 years to realize this fact about myself, probably because my mom still worries about me all the time. I also made a number of questionable decisions in my 20s that could be construed as risky, but were in actual fact, mostly just unresearched.

It’s a hard thing to accept, that I cling to the branches of caution whenever the path gets a little bit slippery, and get heart palpitations when I’m too close to the ledge of breaking-a-rule. But also, this is where I feel safe, and safety, despite admonitions to “get out of your comfort zone” isn’t usually a bad thing.

This past weekend, for my second 35 Trails hike, a friend and I decided we would try for a North Shore classic: St. Mark’s summit, along a portion of the Howe Sound Crest trail. An 11 km round trip with just under 500 metres of elevation gain, and a spectacular view from the top, the trail seemed like just the right challenge for my still recovering body and her pregnant one. 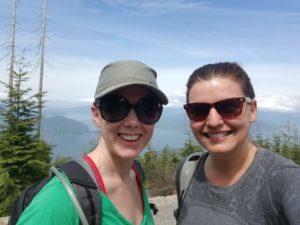 And it probably would have been, if we had made it there. Instead, shortly past the Bowen Lookout, we turned back. Snow covered the trail where, for about 100 metres, it traversed a steep runout with no obvious natural features that we could use to stop ourselves if we were to slip.

I was out. Slippery traverses are my nemesis, the tread on my trail runners is worn flat and – there’s no way around it – I’m clumsy. I trip over my own feet on the regular. My whole body rejected the idea of moving forward, and even though my hiking buddy (did I mention she is pregnant?) seemed pretty comfortable with the well-packed steps in the snow, she had good reason to be cautious. I would have felt just fine about it if I’d brought my ice axe (overkill?), but I hadn’t even thought to bring snacks. I imagined slipping, picking up speed and trying to self-arrest with my elbow. Nope. Nope nope nope. 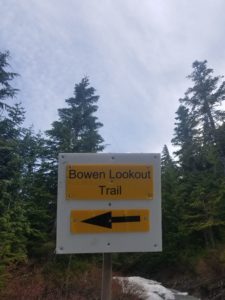 Given that there was snow at the parking lot, and our objective wasn’t to make it to the summit so much as to see how far we could get, turning around was pretty easy, emotionally (and if I’m honest, I was getting kind of hungry). We decided to head back to the Bowen Lookout. It wasn’t very crowded at all, and the views were worth spending a bit of time with before heading back down.  A pair of stellar’s jays entertained us and a whiskey jack and chipmunk popped over to see if we would spare them some trail mix. All it was missing was a raven to make it the most cliched North Shore lookout experience ever.

As soon as we had made our decision to turn around, a pair of women emerged from the woods on the far side of the snowy slope, and, laughing, all but pranced across it, graceful and carefree as gazelles. I don’t regret turning around, but I do hate them just a little bit. They didn’t even have an ice axe.

What is an acceptable risk for one person isn’t acceptable for someone else. And what the joyful snow prancers were capable of was probably not what I am capable of -at least not right now. One woman’s woodland frolic is another woman’s Everest, so they say. 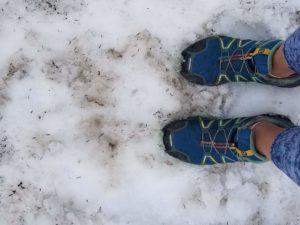 Awhile back, BCA started a series called Unepic Adventures (#unepicadventures), detailing times people made the safe choice and avoided an epic/injury/death. I love it. The tough call, the happy ending, the glorification of making the decision that gets everyone home in one piece. It’s a refreshing counterargument to the “JUST SEND IT!” approach favoured by mountain films and 20-something climber dudes.

I think there’s value in both approaches: pushing forward through adverse or risky situations for the greater glory that lies beyond, and choosing to turn around because today, the risk, no matter how small, just isn’t worth it.

Right now, I’m feeling too lucky to be in the mountains at all to risk losing it again so soon. 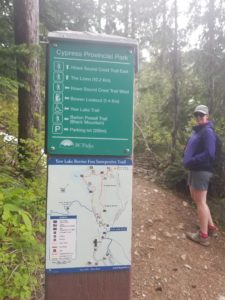