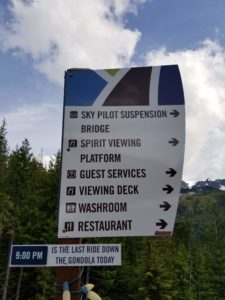 Not quite a trail marker.

Last weekend, I revisited one of my go-to hiking trails. The Sea to Summit trail, near Squamish, climbs from the parking lot for the Sea to Sky Gondola up to the lodge, where you can order a pretty decent cocktail while gazing serenely at the surrounding peaks and Howe Sound, nearly 1,000 metres below.

The gondola, along with the associated lodge, suspension bridge and network of maintained trails, opened for business four years ago. At the time, I was skeptical. When it comes to NIMBYism, it’s subsidized housing for some, and backcountry corporate developments for me. (Yes, I’ve signed an anti-Jumbo Resort petition. No, I do not have a problem with subsidized housing.)

I was worried that the gondola would bring more city traffic to an already crowded-and-getting-worse wilderness area. As though I’m not also a city dweller looking for a nice day hike. But I was too late – the refurbishing of Highway 99 for the 2010 Olympics had already sealed the region’s fate, and the crowds were already coming. 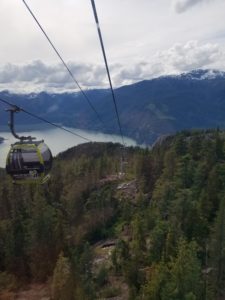 Once the gondola was built, though, I found myself reluctantly changing my mind. It was beautifully done. The trail is varied and pleasant, and a really nice (and still less-crowded) alternative to the Chief. The gondola provides better access to nearby peaks for the more adventurous (and experienced). In the summer, there is live music at the lodge on Friday evenings and Yoga on weekend mornings. And best of all, I haven’t yet had to circle the parking lot looking for a spot.

Rather than just attract more crowds (though I would be very surprised if it hasn’t done that too), the Sea to Sky Gondola seems to have concentrated them in one well-controlled spot – a spot that is also now accessible to people who could never have hiked in.

Sometimes the best way to minimize the impact of human development is…more human development? It seems like an odd thing to say. Nature -trees, mountains, rocks and dirt, in my mind, has always been the pure thing. And humanity -cities, plastic, pollution and overscheduling- has always seemed problematic at best. The opposite of purity; in need of a good cleaning, ideally by some time spent in nature.

But it’s not that black and white. This was painfully obvious as I arrived at my friend’s house in Squamish and promptly realized I had left my shoes in Vancouver. I guess I could have gone in bare feet, but I wasn’t prepared to make that kind of sacrifice. I hadn’t skied all winter: my toes were soft and tender.

Instead, we trawled the local outfitting stores, looking for replacement shoes.

Several years ago, I bought a pair of Salomon trail runners, and it turned out they were the footwear I’d been looking for my whole life. I wasn’t alone: when I joined a trail running group for a run one summer in Canmore, 90% of us were wearing the same shoes. I ran in them, hiked in them, and when my energy left me, went on gentle nature walks in them. But as the years wore on, the once epic tread wore down to a flat sheen. It was time to replace the Salomons, but I didn’t want to.

Forgetting them in the city was what I needed to move on…to a new pair of the EXACT SAME SHOES. 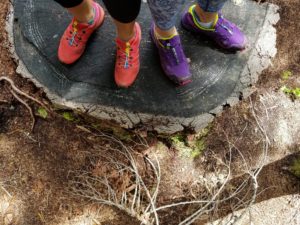 Three stores and an hour later (my feet are “hard to size”), I had my new shoes (and a souvenir Whistler t-shirt), and we were ready to go.

Not exactly the purity of nature. And yet.

The university outdoor club that helped shape my attitude towards outdoor adventure was big on self-propelled trips. Backcountry skiing, biking to the climbing crag, swimming to the trailhead. I know people who have kayaked to work, who resisted owning a car well into their 30s. It’s laudable. But sometimes a girl needs hiking shoes.

And sometimes people need to drive, or take a gondola. How do we draw the line between the right amount of man-made stuff in nature and too much of it? I have no idea. But it’s not obvious.

I do know that I love my new shoes, that we had a gorgeous hike, that I was exhausted because it’s the longest hike I’ve done in a year, and that it felt like a miracle to sit on a patio and drink virgin mojitos when we got to the top, even as all of it left me with a tiny, uncomfortable questions somewhere in the back of my mind, just outside the frame. 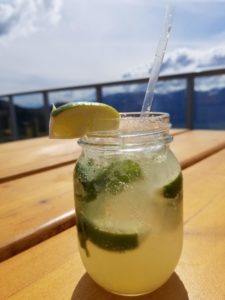 This was trip #3 of the 35 Trails Project. To learn more, or to donate, follow the link below!