I learned to ski as an adult, unlike most of my friends who ski. (This IS Vancouver, after all. There are at least 5 ski resorts we can spend the day at and still get home for dinner, not to mention awesome backcountry access in every direction…except west. That’s the ocean.) I started skiing because I joined UBC’s Varsity Outdoor Club to find climbing partners, and realized that in order to see my new friends at all during the winter, I would have to take up ski touring. Also, I really enjoyed getting outside, even if it meant strapping on death/humiliation sticks and throwing myself down steep, slippery mountains in order to do it.  For years, my attitude towards skiing was that it was a necessary evil. The pain of skinning up was only mildly eclipsed by the sheer terror of going back down.

For the past couple of years, though, I’ve noticed a subtle, unexpected shift in the way I think about skiing. If you have ever undergone a similar transformation, you might recognize these signs:

1. When you plan on going out next weekend, but then there isn’t enough snow, so you have to do something else, you’re kind of disappointed. In the past, your feelings would have fallen somewhere between a sense of relief/freedom from your building anxiety and indifference. But now, you wonder if you should just get out there anyway, in case there’s maybe just enough snow to not gouge your skis too badly.

2. The distance you’re willing to hike with skis on your back before encountering snow is gradually increasing. That distance used to be however far away your car was from the trailhead. But a couple of weeks ago, you hiked halfway to a hut, thinking, maybe there’ll be a bit more just up ahead.

3. When your friends plan a snowshoe trip, you insist on skiing. You used to enjoy how light snowshoes are compared to skis, and how not-slidey. Now, you’d rather not waste a good snow day basically walking (which you can do anywhere, anytime) when skiing is an option.

4. Instead of crying all the way down treed runs, as you hurtle into every trunk and bush like a plinko disc, you range between mostly quiet focus and shrieks of joy, as you actually manage some turns, and mostly avoid hitting anything.

5. When it rains in the city, instead of morbidly accepting that this dreary darkness is your fate now for the next four to six months, you mentally tally the possible number of centimeters your local hill is adding to its base. 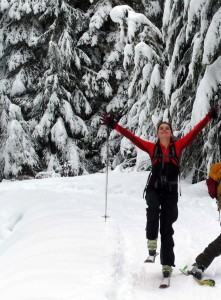