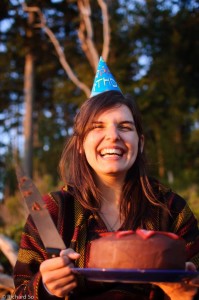 Every so often, I discover something that suggests I am not a total weirdo, despite what strangers and family alike may believe. Those who know me well (and not so well, depending on how forthright I am inspired to be with the new person I’ve just met) know that I have a few unshakeable, and totally unreasonable beliefs:

1. That I have a magnetic field that disrupts the normal functioning of most technology within at least a ten-foot radius of my body. Anecdotal evidence for this theory includes the countless times I’ve been told, “I don’t know what’s happening -I’ve never seen my (computer/phone/website/vehicle’s dashboard/sound system) do this before,” as well as a rumour I heard that one of my aunts can’t wear watches because they slow down on her wrist. It must be genetic.

2. That making wishes and resolutions is best done while watching fireworks. This was nearly ruined many years back during a terrible fireworks experience with an ex. But it’s all better now.

3. That food types should be eaten separately and one at a time, and shouldn’t touch each other on the plate. I’m slowly coming around on things like roasted veggies and mashed potatoes, for example, but salad and steak sauce should never have any business with one another, in my opinion.

4. That friction is an unreliable force that could cease to exist at any moment. I covered that one in this post.

5. That being an even-numbered age is way better than being an odd-numbered one. Odd numbers are just…uncomfortable.

Yesterday, I turned 31 -an odd number (in case you weren’t aware). Being 30 was amazing, and I believe this is an upward trajectory that will lead to somewhere in my 80s, at which point I will be so supremely happy/fulfilled that I will spontaneously cross over into the afterlife in a joyful burst of neon-coloured smoke. Also, as a friend recently pointed out, 31 is a prime number, so technically, I’m now in my prime. But completely apart from my expectations of having The Best Year Yet, I just don’t like it.

My best friend, Anna, claims to agree with me. And while I don’t doubt her honesty, I also wouldn’t put it past her to embellish her commitment to the belief just to make me feel less crazy. According to numerology.com, it is a fact that, “even numbers tend to be more realistic and practical, while odd numbers are idealistic and somewhat impractical.” So looking at the facts, odd numbers are where I belong. Does that mean that I find odd numbered ages uncomfortable because they force me to confront my essential being? Do even numbers somehow act as a counterbalance to my character, while odd numbers tilt things awkwardly towards overdoing myself? When is too much ‘me’ too much? Can the self call out too loudly?

Anyway, I recently read  an article in Outside Magazine about a study that determined that athletes tend to set round-numbered goals -and when they do, they’re more successful. Remember that 3-hour marathon time you were gunning for? Yeah, me neither. But I was shooting for a sub-2-hour half marathon before I broke my back. And breaking through 5.11 at the climbing gym was way more exciting than 5.10d. I know round and even aren’t quite the same thing, but nonetheless, chasing arbitrary numbers is something I can relate to.

Sometime last week, I reached the 2000 view mark on this blog. I saw it coming (a mile away, actually -baby steps), and was preparing a 2000-related post to celebrate (I wrote this one instead). Because 2000 seems like a way bigger deal than 2073.

To conclude, this is really just a very roundabout way of saying, “Heyguesswhat -I’m not crazy! And also, I had a birthday! And THANK YOU for reading my blog enough to get to 2000 views! And please keep doing that so I can get to 3000 even faster!”