This November, I was finally able to make it to Cuba – a place that, during the Obama era, I wanted to visit before it became overrun by Americans, and by November, I wanted to see before Trump ruined it for everyone/incited nuclear war with North Korea and killed us all.

It was an amazing place, which I might write more about later. (But given my track record lately and my general difficulty actually finishing trip reports, I probably won’t — sorry to the editor who had an entire pregnancy and then went on maternity leave before I managed to finish the one about a national park I visited last year.)

Instead, I thought I’d keep the “Girl In The World is now a mental health/chronic illness blog” trend going (it isn’t, sort of, mostly because I don’t have a chronic illness, maybe). My chronic fatigue (small c, small f, no s…I hope) has been playing fun mind games with me, and things that never used to make me anxious now do. Because energy – there isn’t any.

I know I’m not the only one who’s had to plan a trip from the centre of a cumulus cloud of anxiety, and I thought I’d share the wisdom I’ve gleaned (spoiler: there is no wisdom).

Step 1: Get invited to Costa Rica and nearly go there instead.

Obsess over the decision for weeks. Ask every friend you have what they would do, and go back and forth in your reasoning, annoying everyone in your path – especially everyone who won’t be escaping rainville with you. Become convinced that only one option will be the “right one” and the “wrong one” will ruin your health and probably your life. Finally realize that the logistics for Costa Rica don’t even make any sense and stick with plan A.

Step 2: Have a “forgot to pack anything” dream two months before the trip.

Go on an online shopping binge to reassure yourself that you won’t end up in Cuba without any clothing. Acquire two new bathing suits from a company based somewhere in China; a beach wrap from a woman on Facebook Marketplace whom you meet in a Shoppers Drugmart near a Skytrain station, and do a super sketchy-looking exchange in the makeup aisle; a floral maxi dress with literal frills that you will never wear again; a giant floppy hat that will be crushed in your luggage and catch every breeze when you try to wear it; and a universal adapter that will prove entirely unnecessary.  Create a Youtube playlist of “What I’m packing” videos and information about the Cuban tourist currency. 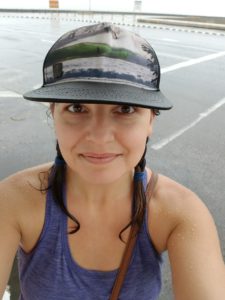 I remembered my clothes! But no umbrella.

Step 3: Have a panic attack on the plane in Texas because you think you’ve missed your connection.

Realize when nobody else is panicking that you’ve forgotten about time zones. Nobody will be sleeping on the floor of a Starbucks tonight.

The men in Cuba are not dangerous, but they are extremely overbearing. Every day around 2pm, reach your limit of avoiding eye contact and answering strangers’ questions about whether or not you have a boyfriend. Grab a snack from a street vendor (because how Cubans do “stores” is still confusing to you and may or may not end in a standoff where you try, in broken Spanish, to explain your presence to a bewildered store clerk and/or security guard) and hide in your room for the majority of the evening. Tell yourself that you are here to rest anyway. Read lots of free ebooks books on your phone, which is plugged directly into the outlet, because they are the same as Canadian outlets and whichever Youtube video you watched that said otherwise was probably sponsored by a company that makes universal adapters. 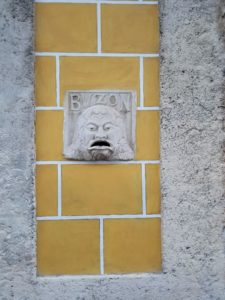 Actual photo of me reaching my catcall limit.

Step 5: Make Friends Who Remind You That Death Is Not Imminent

This works best if people befriend you, because it’s hard to start conversations when you have been avoiding eye contact with all of humanity for the past several days. Meet a bunch of awesome women who also hate the excess male attention, but who aren’t hiding from it in their rooms. Go with them to the dance club and the beach. Follow their advice about how to get a cheap taxi and take public transit. Exchange stories and swap languages and remember what it feels like to laugh with strangers who have suddenly become friends. Remember that Cuba, or anywhere, for that matter, is not a place where people travel to slink around like skittish dogs and hide from the world. Cuba, or anywhere, is where we go to experience the world differently for awhile. See a different spectrum of colours. Leave your room with confidence and curiosity (when you can – reality is still a thing). You can come home whenever you like. 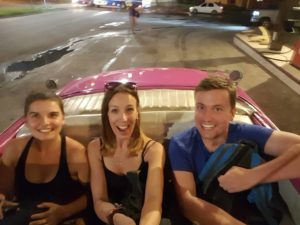 Taxi friends! Photo cred to Laura, in the middle with the selfie stick.