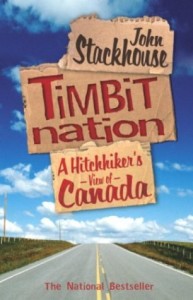 A few weeks ago, I was browsing my local library shelves for something to read as I prepared for my journey east of the rockies. I had wanted to read Wild, a story about a woman’s solo hiking trip, but being a more recent, more popular read, it was out of stock. I opted instead for Timbit Nation by John Stackhouse. A story of hitchhiking across Canada, it would, I thought, be a nice compliment to my own Canadian adventure. It is also 10 years old this year, so why not celebrate the anniversary by giving it a read?

As an aspiring writer, I should probably avoid saying anything negative about the Editor-in-Chief of the Globe and Mail, but he didn’t spare anyone or anything in his narrative, so why should I spare him?

After reading the introduction, I was intrigued to hear what Stackhouse was going to say about Canada, and looked forward to a unique, balanced perspective and engaging prose. I soon realized my mistake.

I should have known, when Stackhouse lauded hitchhiking as a rite of passage, that he and I wouldn’t get along. In fact, when I was younger, I always wanted to hitchhike, believing it to be one of those things you have to do if you’re young and adventurous. But, aside from catching a ride up the road in Arkansas in the back of a pickup with 10 of my classmates in college, I never did. Because, especially for women, it’s dangerous. And heaven forbid you should get into a stranger’s vehicle and be assaulted by that stranger, because not a lot of people (probably Stackhouse included) will genuinely believe you didn’t ask for it. It’s not that I have a vendetta against hitchhiking, it’s that I resent being told that something I can’t safely do is a rite of passage -that in Stackhouse’s eyes, my life is somehow less complete than his because of my lack of hitchhiking stories.

In his conclusion (coincidentally, along with the introduction, the only part of the book where I actually liked the narrator), Stackhouse does eventually concede that hitching is just too dangerous to be recommended. But he never does suggest that picking up a hitchhiker can also be dangerous. In fact, he spends a great deal of words and narrative energy berating drivers who did not pick him up, as though getting a ride with a stranger is his God-given right. He gives the impression of thinking that a person with an empty seat has a moral obligation to fill it, specifically with him, because he is asking. Because he knows he isn’t a dangerous predator, so others should know he’s safe too. I’m not sure if he is going for biting wit by exaggerating his frustrations, but it doesn’t quite work.

What also doesn’t quite work are Stackhouse’s attempts at self-deprecating humour. They seem to be thrown in as a feeble attempt to offset the critical, condescending attitude he seems to have towards everyone he meets (except the young, educated people who are thinking of heading to the States to find better work) and everywhere he goes (except Montreal and Vancouver -the two big cities he travels through on his journey).

Ultimately, this was an interesting read, purely for the descriptions of various places I have never been, and the places I have been, actually. Not to mention all the talk about Canada, and the things that were of concern to Canadians 10 years ago. But reading Timbit Nation was a slog, due to the singularly unlikeable narrative voice employed by the author.