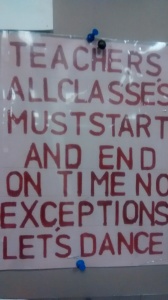 Today’s adventure was something I’ve been meaning to try for awhile: I signed up for a Hip Hop dance class. Being a mennonite, I am genetically incapable of dancing; as a people, we selected out the dancing gene many generations ago in favour of the collecting margarine containers gene.

But I am inexplicably drawn to things I know have no chance of success. Witness: my hopeless pining for the dude who already turned me down and my lifelong determination to learn the violin without actually practicing. Oh the screeching.

So tonight, armed with two girlfriends who are almost as uncomfortable as I am dancing in front of a mirror, I attended my first Beginner Hip Hop class at Urban Beat Dance Co. in downtown Vancouver.

We started out with some moving from side to side and stretching, which was manageable. But suddenly, we were jumping and slouching and there were elbows involved, and I became completely lost for awhile. I began to despair after catching a glimpse of myself in the mirror, looking like a piece of driftwood that’s stuck upright in the sand and thought it could maybe do hip hop.

I kept looking over at my friends to ask what was going on.

But it was a lot of fun just trying to move in a different way from what I’m used to, even if my effort didn’t produce the desired effect. I didn’t even notice I was sweating until class was over. By the end of the class, I could actually pretty much do the series of moves we had learned without too much jerky fumbling. Maybe someday, I’ll also manage to look like I’m dancing.

Post dance class selfie. I had to prove I was there.