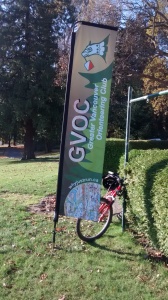 Today I decided to try my hand at orienteering. A friend had sent me a link last week to sign up for a “race”, and I needed an adventure for the day that would accommodate my limited mobility.

As someone who can’t read a map to save her life, and is pretty good at getting lost pretty much anywhere, I have to admit, it was way more fun than I thought it would be.

The race was organized by the Greater Vancouver Orienteering Club, which hosts Wednesday night events every week and weekend races monthly (or so). I signed up for the short course, which was 2.5km long, and involved finding 10 stations in the order indicated on a map, an receiving a total time once finished. The intermediate and long courses each had over 30 stations, with the objective of finding as many as possible in 1 or 1.5 hours, respectively.

After registering, we all received little plastic electronic trackers that we had to tap at the start, and then at each station as we found it. At the end of the race, we all received a little printout that looked exactly like an old receipt giving details of the times and order of the stations we had hit.

Electronic tracker and map. Hmm…where am I? 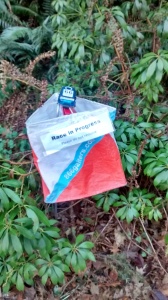 One of the stations -found one!

I had no idea how seriously some people take this sport. There were compasses that attached to the thumb, for easy access. There were special orienteering socks and shiny knee-length knickers and people quickly stashing their warm jackets in favour of shorts and thin, quick-dry tops. People were warming up and stretching and jumping up and down to limber up. It was like a road race. Except when the organizers yelled “Go!” everyone flipped over their maps and either stopped moving outright or wandered distractedly as they studied the maps and tried to plot out the best routes. It was like watching the 2-year-old race at a church picnic. All it was missing was a group of moms across the field yelling, “This way, Frederic! Over here!” But soon, everyone had oriented themselves and darted into the woods of Stanley Park headed in various directions. 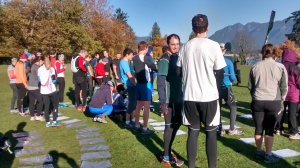 That was the hard core element. There were also families with small children and a group of boy/girl scouts and people like me (ok, I think I was the only one limping and pausing between stations to take photos, but you get the idea).

It was really fun to explore parts of the park that I never visit otherwise, and to have sort of a purpose to my 2.5km walk. It was an absolutely beautiful day, and it felt really good to have gotten up at a reasonable hour for a bit of fresh air and exercise. I will definitely be doing this again. Maybe next time, I’ll be able to run. 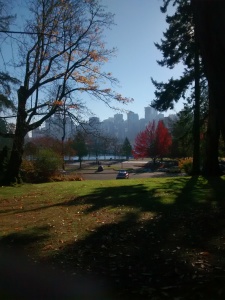 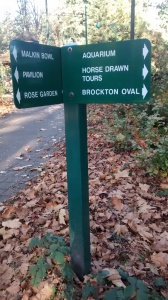