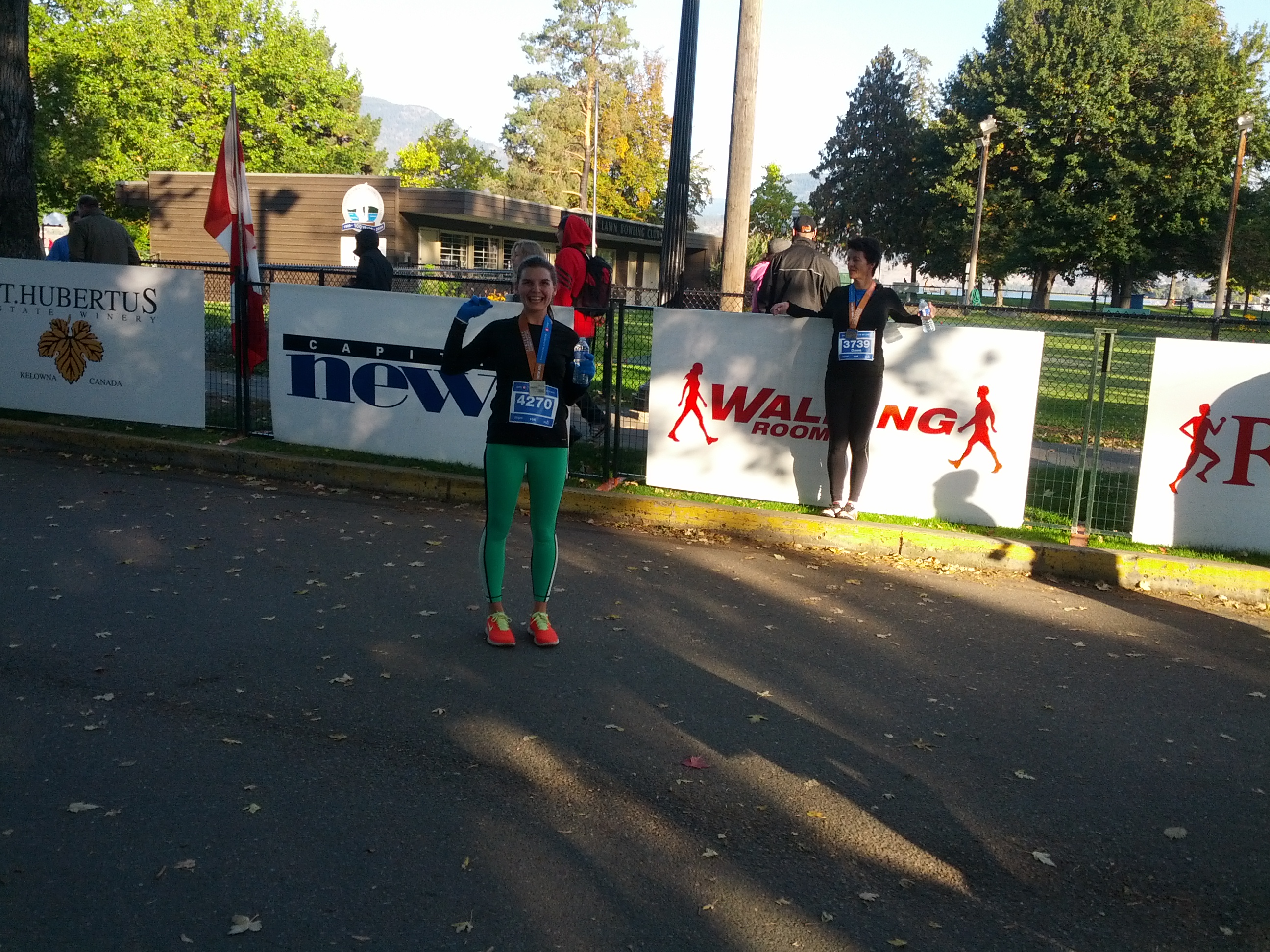 Yesterday, I went for a 14km run. Before leaving, I prepared for it like a new parent packing a diaper bag. I dug out my fuel belt, carefully filling the two small water bottles equally, but not all the way, selected a soundtrack that conveyed energetic-but-not-frantic (purposeful-but-not-obsessive), experimented with pocket use and key storage and ear bud cord alignment. I agonized over long sleeves versus short sleeves and whether or not to wear a hat. I brought my phone along, and a debit card, just in case. I ate a handful of nuts.

As I ran along Kits Beach, and (inevitably) encountered legions of other runners, I became uncomfortably aware that I had packed for Armageddon, only to encounter a pleasant afternoon. Nearly everyone else was out in t-shirts and shorts -nobody else was carrying a survival kit around their waist. I began to reminisce fondly about the days (last week) when I was only running 10k at a time, and life was so carefree and unburdened.

Then the nostalgia wore off and I began to think more critically about the situation. Why was I freaking out over 4 extra kms?

I thought back -way back- to the last time I had run more than 10k, and found my answer.

It was three years ago, while training for a half marathon, that I last pushed past the 10k mark.  I had just finished my education degree, and was working three jobs to make ends meet while looking for teaching work. I had gained nearly 20 pounds during a stressful year (one that started with a broken foot) and a demoralizing, life-consuming practicum. Running was keeping me sane. It was the anchor mooring me to the parts of myself that sat deeper than what I’d been dealing with lately.

But running was also breaking me. I’m one of those people who gets shin splints just thinking about running on pavement. In the past, I’d battled for years with my IT band, had given up on marathon training over knee problems and, most recently, during a long run, I had somehow tripped on my own feet and fallen onto my hand, prompting a lot of swelling and a visit to the radiologist. Don’t even ask how that’s possible.

This time around was no exception -a lingering burning in the arch of my left foot and a sharp pain in my achilles every time I took a step drove me to the treadmill for my long runs, which was only marginally less painful than the road. I ran anyway, because I had to. And the predictable overuse injuries that I sustained as a result still hover over my head (or underfoot, as it were). For over two years, I couldn’t run without pain. It took a year of physio and running very conservatively to get to 5k. When I finally made it to 10k this past fall, (a race that resulted in a personal best and no pain), in a haze of endorphins, I giddily sent a gushing thank-you to my physio, who, as far as I was concerned, really was God’s gift to (injury-prone) women (and men).

But 10k was where I stopped. Half-marathon training is what broke me (most recently), and I don’t want to be broken again.

Plantar fasciitis isn’t the only thing that has prevented me from running for long stretches. When I think about it, there have been several forced hiatuses (hiati?) for me since I started running, way back in 2002. These include:

1) Being depressed. (It’s hard to go running when you can’t get out of bed.)

2) Being on anti-depressants. (Nobody warned me about the “electric shock sensations” that would happen every time my heart rate went up. On the bright side, I could get out of bed.)

4) Having a broken foot.

In the past several years, I’ve managed to avoid 3 out of 4 of these things. But I just couldn’t resist the temptation to try another half-marathon. I don’t think that I should.

I wonder, at what point does avoiding what might break us become the thing that is breaking us? I read an article today about not being afraid of people, because the likelihood of those people being decent human beings far outweighs the chance that they will turn out to be the bad guy on the evening news. Some people might say the risk isn’t worth it. For the author, living in fear and suspicion is the greater risk.

If I’m being honest with myself, I am afraid of not being able to run. Last year, a colleague told me, “Running is the one thing that hasn’t changed in my life -it’s unexpectedly become part of my identity.” I feel the same way. I’m not fast -the only person I’m competing with is myself. But I’m not quite myself when I can’t run.

So is it worth it to push for the half-marathon, when I could safely stay in the realm of 10k? I’m not sure, but I hope so. I imagine it’s one of those things that’s worth it until it’s not. We trust that people are mostly good until one of them isn’t. The exhilaration that comes from mountain sports makes us feel alive until we are buried in an avalanche, or we disappear into a crevasse. Everyone draws the “worth it” line in a different place.

Running isn’t life or death. But the more of it I do, the more shiny pieces of myself I pick up, like beach glass tumbled in from a past life. For now, that’s worth it.