Have you ever had one of those dreams where you’re skiing at a resort in the interior of British Columbia, only the resort is actually abandoned, so instead of looking over your shoulder for speeding snowboarders with no sense of personal space, you’re skinning up past snowmobile tracks into an eerily silent wonderland, presided over by a chairlift that has been made thick and ghostly by about half a foot of wind-hardened snow?

A busy day at the top of the ghost chair.

And then you notice that the hill is covered in marshmallow treats, but the marshmallows are actually trees that look for all the world like they belong in Whoville? And despite being January, it’s so warm you mostly don’t bother with a jacket, and you expect the snow (shimmering in the sun like a teen vampire heartthrob) to be crusty, but the moment you hit the trees, it’s just soft, knee-deep powder, and for the first time in your life, you’re not only (kind of, sort of) turning in powder, you’re actually having fun skiing trees, and you can hear your friends laughing their way down the mountain, and when you all meet up at the bottom, grinning like the Grinch after his heart grows three sizes, you decide to go back up and do it again, and again.

I had that dream over New Year’s. Except the distant (and not-so-distant) wail of snowmobiles pinched me every now and then to remind me that this wasn’t a dream. This was Mt. Baldy -a place my friends had noticed once on a road trip, and then looked up when the cabin they’d wanted to rent, on the side of the Coquihalla, turned out to be full, along with all of Manning Park, and a few other options.

The cabin we got instead had a sauna, so I think my friends made the right choice (the choice being Mt. Baldy or nowhere else –sometimes last-minute planning works in your favour). 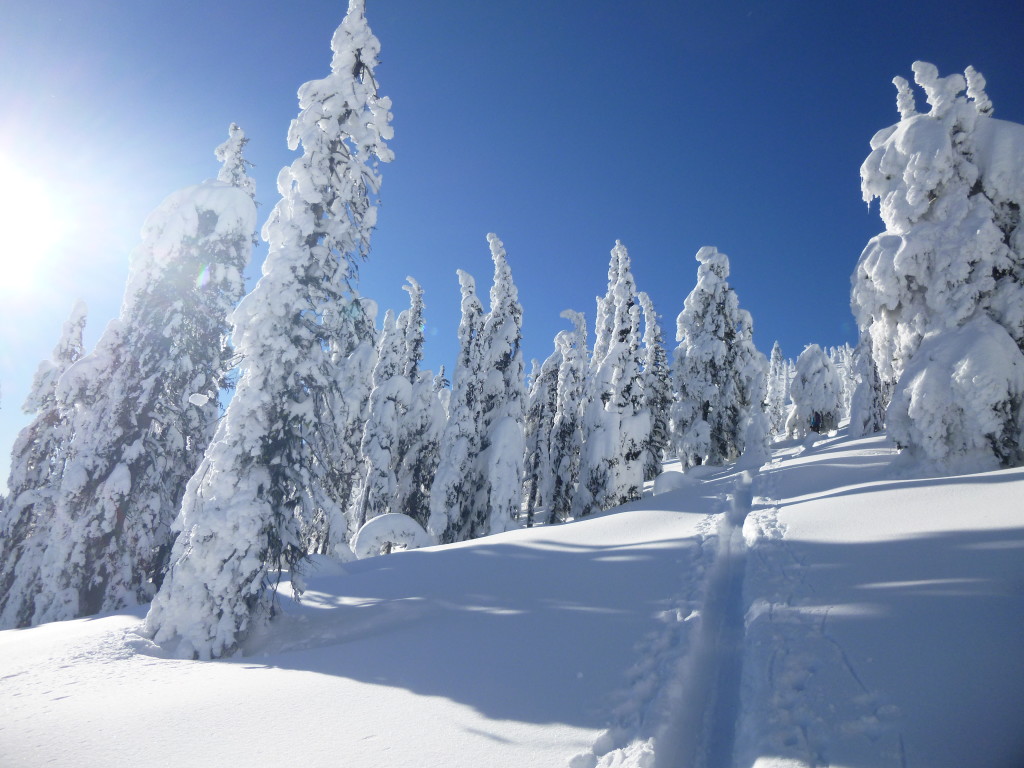 Skin track through Who Trees.

Will the Real Mt. Baldy Please Stand Up?

There are actually two Mt. Baldies, because “Baldy” is such a great mountain name. One of them is in Southern California and boasts “vintage” chairlifts, which sounds like a really fun kitsch experience that’s also totally safe.

The Mt. Baldy I visited is located roughly 35 kms east of the happening town of Oliver, BC, along the scenic/intermittently icy Mckinney Road. For a less will-I-die-on-the-way adventure, you can take highway 3 through Osoyoos instead. (Or maybe it’s the other way around -if you want to survive, ignore my advice. This is why I should never be the navigator in any situation.)

The resort was founded in the ’60s, when it had one T-bar. Eventually, lifts were added, and people built cabins on the property -there are currently around 130 of them.

The cabins are down and to the right. You can’t see them from here though.

The resort went into foreclosure in July, 2014, because no wealthy businessman with a checkered past who wants, deep down, to do good swooped in to save it/turn it into a refuge for orphans/the poor/abused animals. Weirdly, a group of investors claimed to have bought the property this past fall, promising to open the resort in December, but less than a month later, it was revealed that they hadn’t. The matter is apparently now in the Supreme Court, with two different investor groups fighting over who gets to buy Mt. Baldy. I don’t know how it all works, but I imagine it’s something like West Side Story, and soon there’ll be a rumble.

Anyway, the resort did not open, which meant we had it to ourselves…along with the snowmobilers, of course. 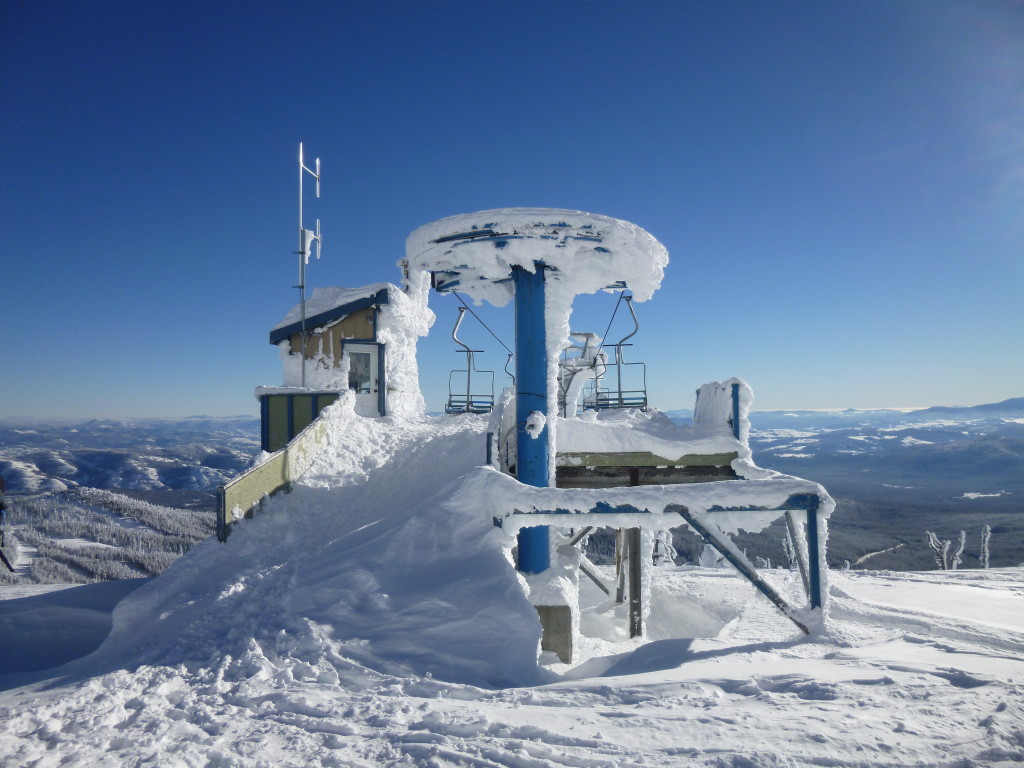 Doesn’t appear to be running.

Ski touring on Mt. Baldy is not your typical backcountry experience. For one, the snowmobilers are very polite. While we were skinning up one of the ski runs, in order to access the trees farther along, snowmobilers ferried their snowboarding friends up the side of the run. They smiled, said hello, and even offered us rides. They also seemed to avoid large swaths of the mountain. I’m not sure if there are regulations (and really, who would enforce them), or if it’s just that there were enough slopes to go around, but everyone seemed to be happy sticking with their own little slice of the mountain.

I haven’t been this impressed with snowmobilers since that time we were invited to a giant New Year’s bonfire in the middle of a frozen lake, and one of them took me for a spin.

Mt. Baldy is not an epic. You can roll out of bed at 10am, eat your weight in eggs and bacon, spend an unreasonable amount of time hunting for your missing glove (that looks exactly like everyone else’s gloves), and still get a bunch of laps in (or get to the summit and back) before dark.

(For the record, I did not go to the summit. I spent summit day at the cabin, entertaining the dog, who thought that yoga was an invitation to cuddle/try to gently consume my face, and catching up on some work, because I’m old and my hip flexor was acting up. I was told the summit was “good”, “cool” and “fun”, in case you’re wondering.)

Since “dark” happens around 4pm at the beginning of January, that left plenty of time for after-ski sauna-ing, snacking, dinner, games, more-fun-than-tuneful sing-alongs and building a jump for the “no board” at the bottom of what used to be a ski run.

On New Year’s Eve, just before midnight, we waded through the snow out back of the cabin, and into a bonfire/dance party. The toques and mitts were flying. If you’ve never danced with a bunch of strangers in snow pants, to songs about tractors, while wearing a giant down coat and a pair of hut booties, then you should really consider spending New Year’s 2017 at Mt. Baldy. 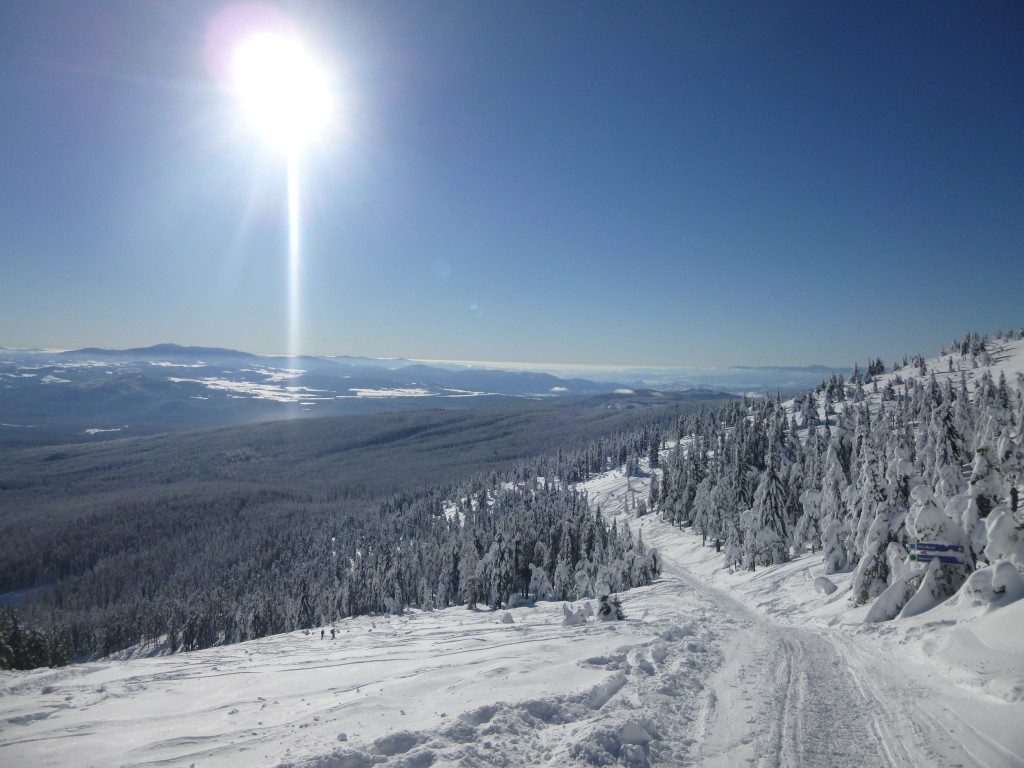 Skinning up a green run.

I bought my first pair of hut booties in university, for the purpose of preventing my toes from freezing and falling off on hut trips. They were blue, came up to a few inches above the ankle, and were filled with synthetic down. Each one was roughly the size of my head, and they were glorious. So glorious, that I soon realized I couldn’t limit their use to the backcountry. I began wearing them on walks around the neighbourhood, to friends’ houses, the grocery store. Really, I was ahead of my time, because not long after, Uggs came into fashion, which are basically less-functional hut booties.

Those were the days of trying to keep the backcountry good times rolling in my daily life. They were also the days of being cold all the time. (I wore my down coat continuously from October to sometime in April, which might be normal if you live in, say, Winnipeg, but for Vancouver, it’s a tad unusual.) I don’t know if I’m less cold now than I used to be, or if the technology for insulated clothing has just improved. Either way, the down coat and hut booties mostly only come out on ski trips.

And so, of course, I brought them along on the Mt. Baldy trip as well. At first, people made fun of me, because technically, a heated cabin with a dishwasher and a massage chair is not the same as an uninsulated hut in the mountains somewhere that may or may not have a wood stove, and that definitely has a mouse problem. But then, one by one, more pairs of hut booties emerged until it was obvious that nearly everyone else on the trip had ALSO brought them. Because hut booties are awesome, and should be worn whenever the slightest justification can be given.

So maybe we weren’t really in a hut. Maybe some of us (or at least me) were remembering so many past New Year’s hut trips, and wondering if the days for that passed with our twenties, and worrying that we’ve gone a little soft, and struggling with feeling pretty good about trading the simple life of sleeping twenty-to-a-floor in a difficult-to-access wooden structure that feels like it might collapse in a strong gust of wind for real mattresses and the option to have dry boots every morning.

There’s nothing quite like the luxury of warm hut booties when you’ve been skinning all day with a 60 litre backpack and your boot liners are drenched with snow or sweat or both. But you know what else hut booties are good for? Riding a GT racer over a jump that your friend dug up with his avalanche shovel, before heading inside to sprain your finger in an overzealous game of Dutch Blitz. 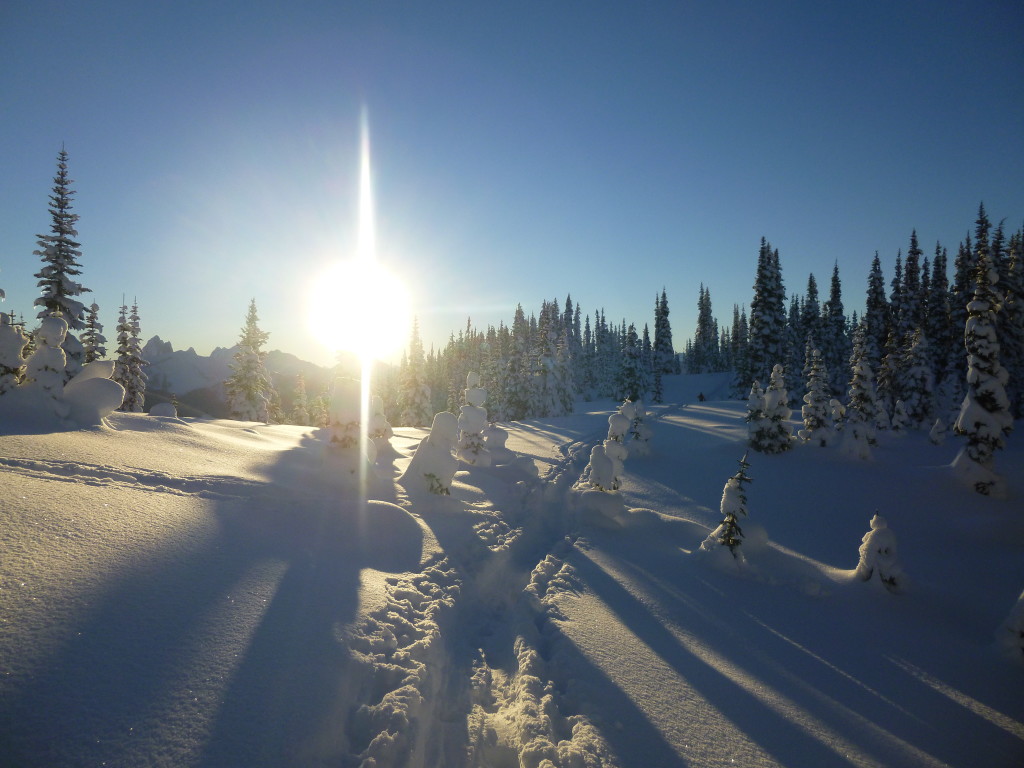 My friend Kevin and I stopped for a half-day tour at Manning Park (because the backcountry at Manning on a sunny day is something you shouldn’t miss, and also because Kevin had been wearing his ski goggles as sun glasses for most of the drive and wanted to do the rest of the trip in the dark). 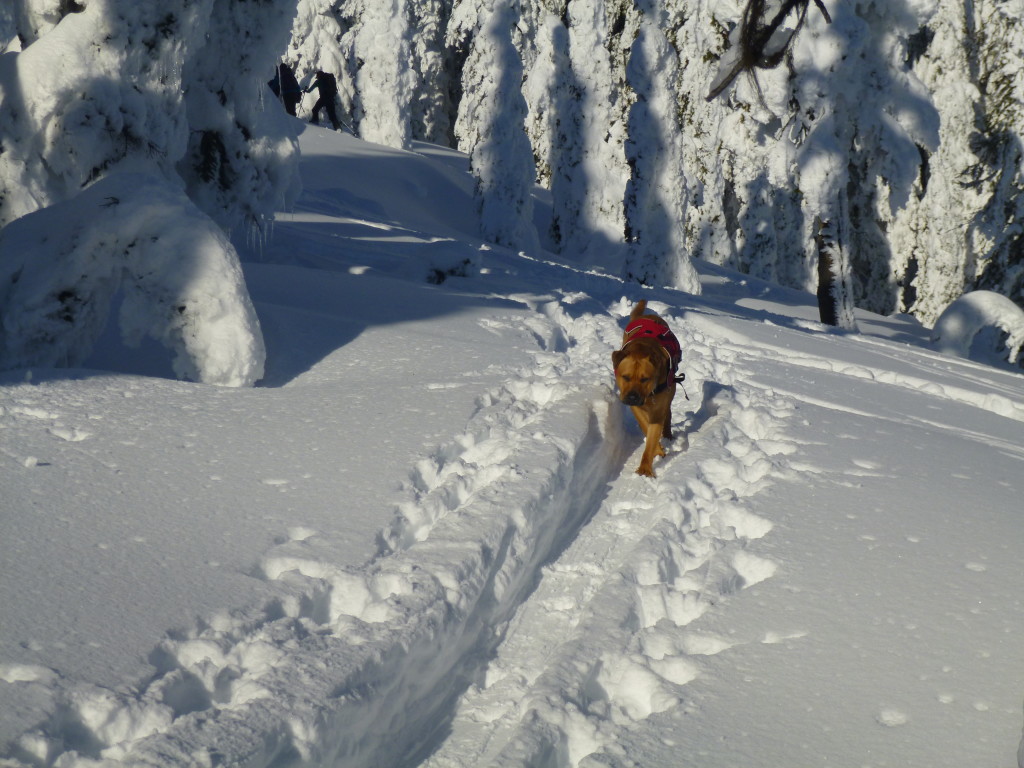 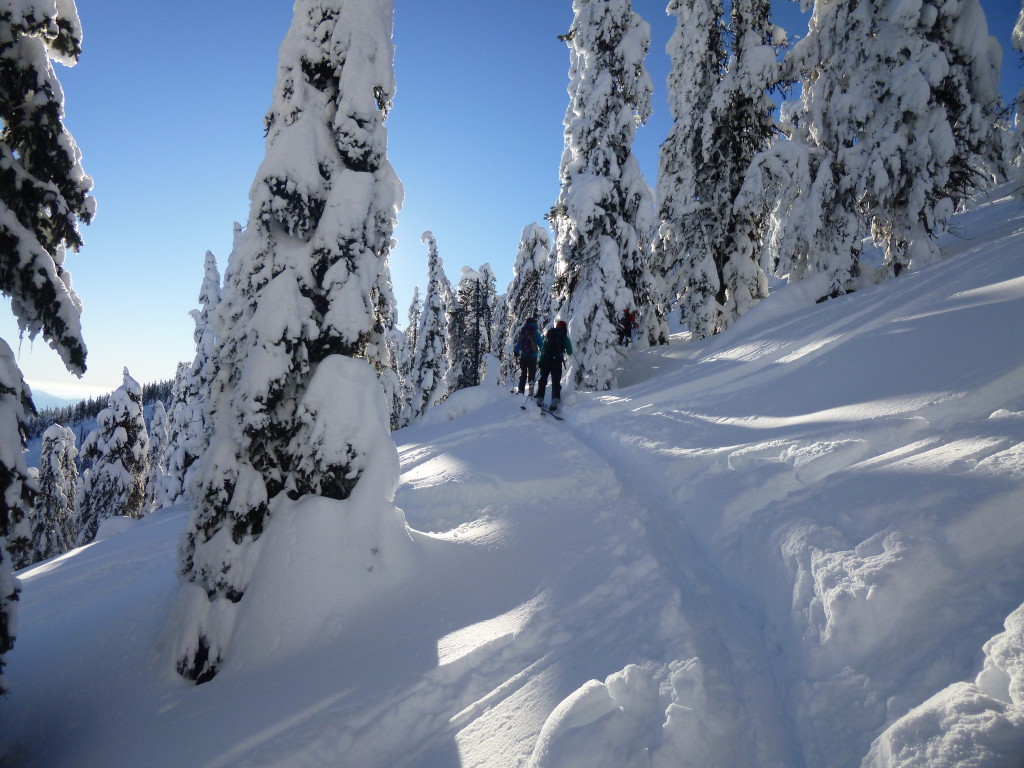 Heading back up for another lap. 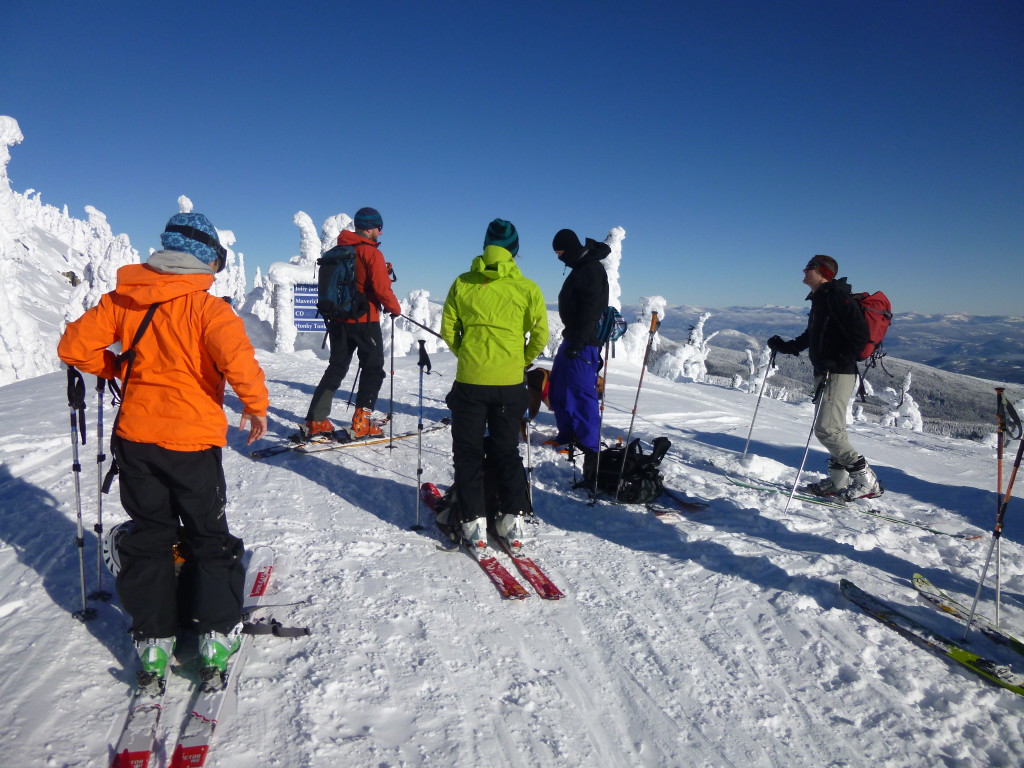 The crew. Making decisions at the top of the lift. 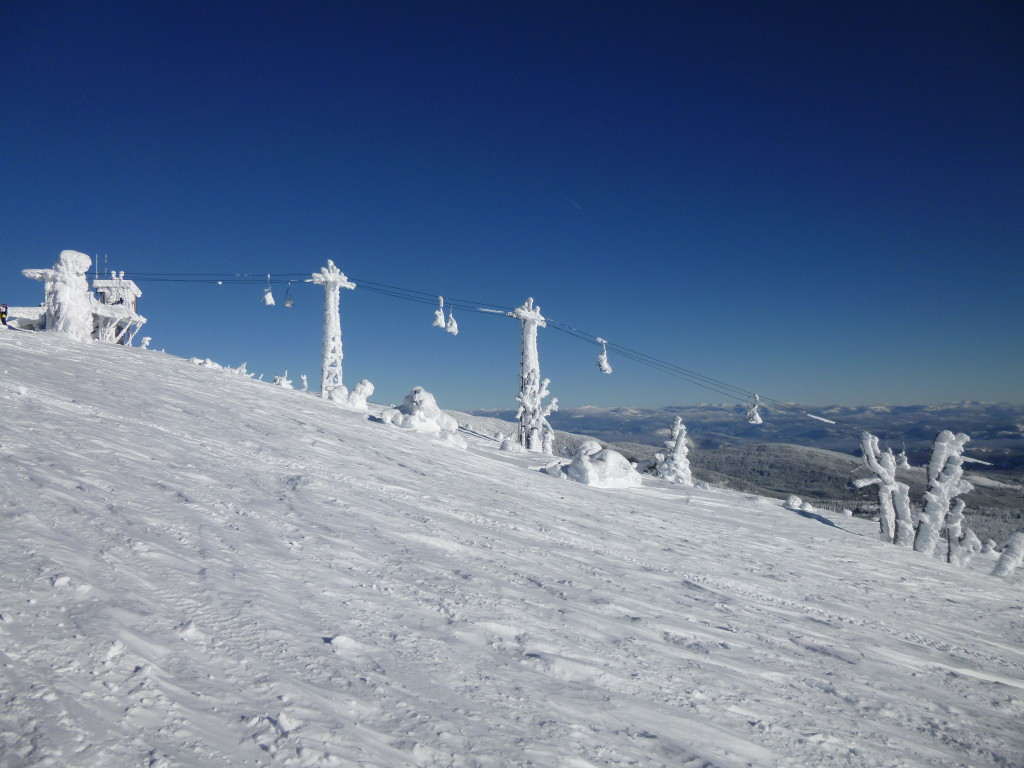