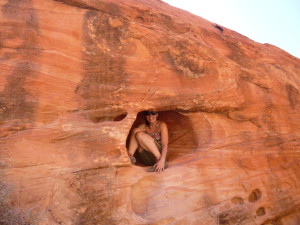 Stuck in a rut -and loving it.

For the last couple of years, my outdoor climbing focus has been my headspace. Many years ago, when I first started leading, it was really scary. As I got better (or perhaps, as I upped my dosage of anti-depressant medication), the fear dissolved, and my climbing improved drastically. I’m no Beth Rodden, so for me, “drastic improvement” meant I could lead 10b sport routes and make little forays into trad leading, rather than trembling uncontrollably above the first bolt of a perfectly climb-able 5.8. Pretty epic as far as I was concerned.

Two summers ago, after a relocation-related hiatus from both the crags and the gym (and perhaps because I had stopped taking the “happy” pills), I was dismayed to discover that the fear had not only returned, but had spread to things like driving on mountain roads and hiking up steep things. The problem, I kid you not, was that I had stopped trusting friction. It wasn’t just, “Oh, my feet might slip on this slabby bit.” It was, “The force called friction, which we have always trusted to exist, might suddenly cease to be a force.”

This meant that the anxious devil on my shoulder had a reason to worry about everything. Turning a corner in a mountain pass? “You know, if friction stopped working right now, you’d just keep going straight, right off that cliff and into the abyss. Why not look out your window, over the edge, to get a better look at your imminent demise.” Leading 5.7 sport? “That big ledge might seem solid, but what if your hand just slipped off? And also your feet? That would probably hurt a lot.” Leading trad? “What if that bomber cam placement just slid right out? If that, and the two nuts, hex and other cam below it all fail as well, you’re going to deck when your fingers magically slip out of this crack.” Even cycling wasn’t immune to my worry-devil: “Without friction, your brake pads will be useless. What would happen if you couldn’t brake right now? Better try it, just to make sure it still works. In fact, just come to a complete stop and stay that way -better to be safe.”

If this sounds crazy, it is.

But that was my headspace for a long time. And for a long time, I let it get the better of me, because I had no idea how to manage it. Believing that friction is unreliable is not exactly reasonable. And when you can’t reason with yourself, what else is there to do? The available options for awhile were trickery and distraction. I suddenly understood why people with fears of heights can’t look down. Better to convince yourself you’re just an easy hop to the ground. Deep breathing helped me through a near panick-attack or two. But nothing was really doing the trick.

And then, last spring, I went to Red Rocks and had what came to be known (by me) as the Trip of Profound Epiphanies. I had a new one (or two) every day, and they have been making my life better ever since. I have no idea what inspired them, and I’m not someone who feels super at-ease using that kind of language (like, I do yoga, but I don’t DO yoga, if you know what I mean). But when life hands you a teachable moment, you learn or you lose out.

These are two of the things I learned that cleared my headspace drastically and quickly.

Epiphany #1: Going hard is useless when it results in not actually going anywhere.

My goal for the trip was to lead something without freaking out. In order to do this, I had to be ok with starting easy. 5.7 sport was going to have to suffice, and I was going to have to learn to be ok with that. Otherwise, I was going to spend a lot of time at the bottoms of routes, watching that annoying girl who’d only been climbing for 3 months lead with ease something that I wouldn’t touch without a stick clip and alcohol in my system. (No, I don’t drink and climb, unlike the naked frat boys from Maine on the crag next to us using their chalk bags as beer holders.)

Celebrating success is fun -I highly recommend setting the bar as low as possible, and then using it as a ladder rung to get to your next bar.

At some pint during my first lead of the trip, I had an epiphany about friction: even if it did give out, there was nothing at all I could do about it. In fact, there are lots of things (in climbing, as in life) that I can’t control, no matter how much time and energy I spend worrying about them. I know this seems like a straightforward concept. In fact, most people have probably already sorted this out by the time they get to be my age. But somehow, I had missed the memo. And when I finally got it, the resulting relief was pretty sweet. There were so many things, friction and its continued existence being one of them, that I could stop worrying about, because I had absolutely nothing to do with them.

It’s amazing what you suddenly have the headspace to think about when you clear out that god-complex and its associated needless angst. Things like good holds, the sun’s heat on your back, the good people scattered all over this beautiful red crag like strange mountain goats.

By the end of that trip, I had led a few 5.7s and a 5.8, and was insanely proud of myself (so much internal high-fiving). I had also broken the curse. The friction-denying worry devil had vacated my shoulder and what started out as terrifying became just ordinarily scary. Which is the kind of fear I can manage.