Lately, I’ve been thinking,”How can I make a post without doing any of the work?” And then I took a look at what was happening on Facebook, and realized I have a lot of adventurous friends who take great photos. So even though I’ve been doing the same three day trips over and over again this winter (life happens), with a little help from my friends (ie: with their permission), I can still bring you fodder for your adventuring daydreams.

And so, ladies and gentlemen (and everyone else), I bring you: Photojournal. A series (I hope) where I’ll highlight some great photos of some great places, taken by some great people (who aren’t me -you’re welcome). So much great!

Today’s destination is Metal Dome -a skiable peak with access from Callaghan Valley. If you’re interested in going (which you will be after seeing these photos), you can find useful information on the VOC Wiki page.

The photos were taken by my friend Evan, who recently moved back to Canada from Australia. This was only his second day out (damn him). He only has one Flicker album so far, but it’s worth checking out. I asked Evan to fill me in on the day trip, which happened last Sunday:

“We had a track to follow most of the way [up] as it seems to be a popular area now. Once we hit the alpine we would get passed by an annoying snowmobile who was shuttling skiers up and down for runs. It took about 4 hours from car to peak for the main skin up.”

Conditions were, “spring down low and winter up high.” (Which, I suppose, is like being a, “Lady in the streets.”) Evan says, “I love it when it’s like this as you often get fast travel and good skiing.”

I asked Evan if it was worth it (this is always my first question), to which he responded, “Of course!” He suggested that a more difficult (sort of) question to answer would have been, “Is it worth heading out every single weekend for years at the expense of doing other activities and not seeing non-skiing friends/missing other social events?” I have a feeling he might be leaning towards, “yes” on that one too.

And just to show you what a great guy Evan is, this is what he said when I asked what the best part of the day was: “Surprisingly it wasn’t the ski down (which was great) but just the chatting and catching up with friends.”

Without further ado, here are a few of Evan’s photos from Metal Dome. To see more, click the Flicker link above. 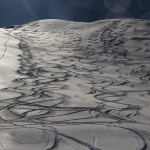 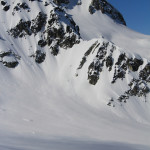 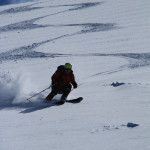 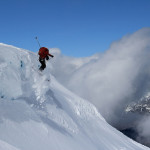 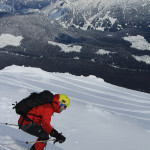