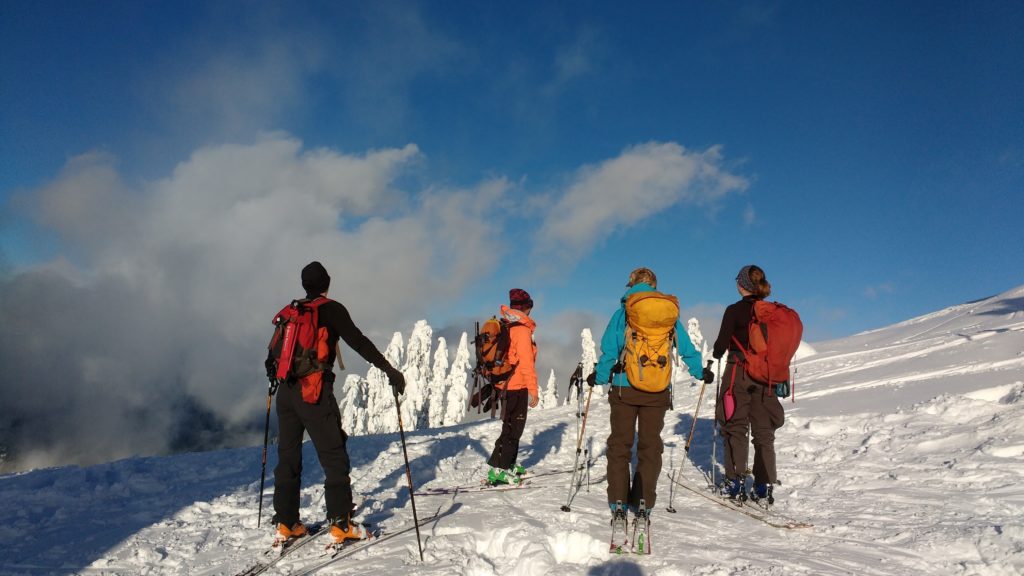 It’s a new year, and as we collectively bid good riddance to the last one, some of us have begun to imagine all the ways in which this year — 2017 — could be better. Others are doggedly refusing to imagine any such thing (hope leads to disappointment, after all). And some, like me, are trying to remind themselves that they will not magically become a perfect person as we compose our personal development wishlists and map out how we will make them come true — this time. This year, I’m focusing on the backcountry.

I celebrated the new year in Revelstoke, skiing with people who are all better at skiing than I am. Some of those people started skiing when I did…and some started after. It got me thinking about all the backcountry skills that I rely on other people to have when I’m on trips. The actual ability to ski aside, there is a lot of skill and knowledge that goes into having a safe and fun time in the wilderness, and I could really stand to improve, especially given how long I’ve been doing this.

So, I hereby declare 2017 the YEAR OF BACKCOUNTRY SKILL DEVELOPMENT™.  If you can think of a catchier moniker, let me know.

If you’re like me, and looking for ways of becoming a better backcountry traveler, I’ve made a list of skills for us to work on! Skills that, like core strength, will serve us well across the wilderness experience board.

This fall, I wanted to take a friend on a hike that I had been drooling over for awhile. I took photos of the directions from my 103 Hikes book, as well as the most recent trail report I could find online (on a trusted hiking forum), and we were off.

Things did not go according to plan, and instead of spending a glorious sunny day traipsing through alpine meadows, we spent it walking a maze of logging roads in a nightmare-like hunt for the trailhead and arguing about which way to try next. We ended up eating lunch in a cutblock, before admitting defeat and heading to Whistler for defeat coffee. (This doesn’t taste nearly as good as victory coffee, fyi.)

I suck at wayfinding. Once, I somehow left a snowshoe trail (because snowshoe tracks in the snow aren’t obvious?) and ended up following a creek bed for hours, hoping it would spit me out somewhere useful, before my then-boyfriend (who had been searching for hours) found me and hiked me back up to the actual trail, which was literally a few meters up the slope to my right.

This year, that changes. There are lots of very useful mapping and GPS apps (so I hear), as well as programs you can purchase. There are also actual, paper maps and compasses that aren’t digital. Sometime in the near future, I will write a post or two about how all these things work, and what best practices are for finding your way in the wild.

Backcountry use is exploding in popularity, and with it, the need for education about what you shouldn’t do there. It may seem obvious that leaving a coffee cup on a tree stump is no way to treat mother nature (and is also SO basic…are the kids still using that word?), but some people have clearly not gotten the memo.

Leave No Trace is exactly as it sounds. Essentially, don’t leave your crap lying around in the woods. Literally. (And figuratively.) Also, don’t take stuff that isn’t yours. Basically, just be respectful and leave things the way you found them. Way back in my outdoor ed college days, I was assigned the task of teaching my classmates about Leave No Trace principals, and got pretty fired up about them. Since then, I’ve gotten a wee bit lazy in my practice. Let’s just say it’s been awhile since I had a ziplock bag full of used toilet paper in my backpack.

No more of that, this year! I won’t be part of the problem.

I’ve broken my foot at the top of a hike. It sucked. I hiked out with the help of a friend, but it was agony. I’ve had friends break bones, destroy knees, tear ligaments, and concuss themselves in places that were unreachable by ambulance. Injuries happen (they happen to me wherever I go), and when they happen in the wilderness, having some idea about what to do is a really useful skill to have.

There are a lot of wilderness first aid courses out there, and no real overseeing body setting the standards (at least not that I’m aware of). Courses typically start at 40 hours, though Wilderness Medical Associates now offers a 2-day course for “the outdoor enthusiast”. These courses aren’t cheap, but they can be extremely valuable.

If your backcountry pursuits take you into avalanche terrain, this one is a no-brainer. I recently finished an AST 1 course (finally – I started one a decade ago, but wrecked my knee on day 1, and couldn’t finish), and finally feel like I at least have a starting point for understanding the terrain I’m traveling in, and what the recent weather patterns mean to me personally (where do we STAND, storm system??).

In BC, a 2-day course will teach you the basics of how to use your safety equipment, how to read terrain and analyze the effects of recent weather on the snowpack, and what to do with an avalanche forecast.

If you don’t know whether you’re someone who travels in avalanche terrain, it might be wise to do a bit more research. Backcountry skiers and snowboarders, snowmobilers and (to a lesser extent) snowshoers are the most likely to end up in such areas.

Something that generalized anxiety has taught me is that things build up. If I’m skiing in terrain that’s at the limit of my ability, that’s difficult, but I can manage it. Add in being really cold, and it gets a little harder to manage. Top it off with exhaustion, and you get a sitting-down-in-the-snow-and-refusing-to-go-on situation.

You can’t always choose what the conditions will be, or whether a section of the trip turns out to be more technically challenging than you were banking on. But you can build a baseline of fitness that will help stave off exhaustion so that you can focus on the task at hand.

Last year, I picked up a copy of Training for the New Alpinism and read about 5 pages. There was something to do with heart rate training. I understand it’s an excellent resource for those who take their training seriously (like I will one day).

But for my slightly more “weekend” warriors, a lighter program of getting out there lots, combined with some sort of cardio during the week and (increasingly) lots of stretching and foam rolling seems to do the trick.

On a recent visit to my physiotherapist, I learned that exercises targeting stabilizing muscles are quite important. And of course, you can’t go wrong with squats and planks.

Looks like we’ve got our work cut out for us.