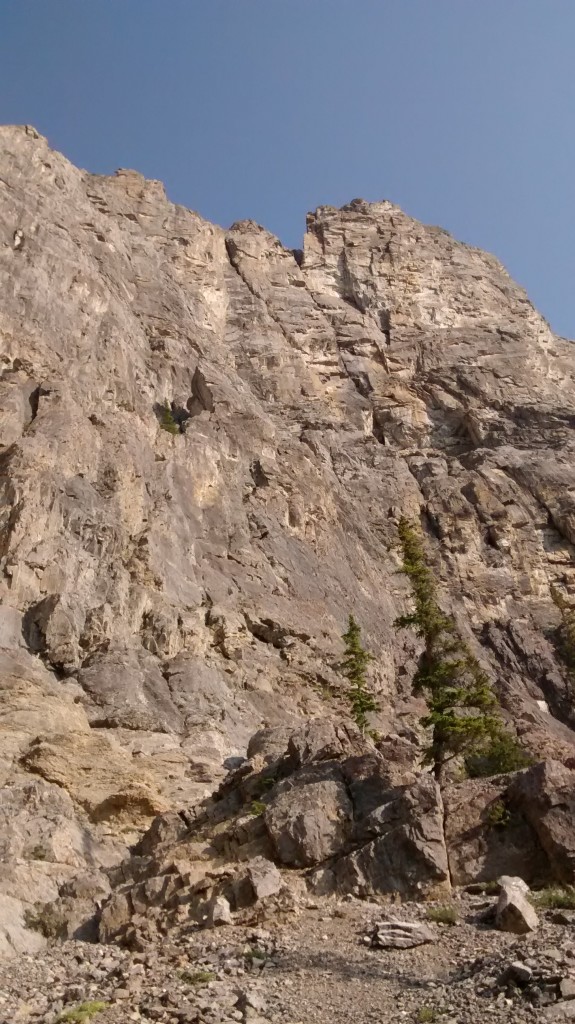 Looking up at the climb.

On my third day in Canmore, I was lucky enough to climb Eeyore’s Tail, a 10 pitch, 355 meter route up the face of East End of Rundle (EEOR).

Aside from the occasional jaunt up Charlotte’s Web, a little 2-pitch sport climb at Cheakamus Canyon, I hadn’t done any multi-pitch routes in probably 8 or 9 years. So when one of the responses to my post on the Bow Valley Climbing Facebook page was an offer to lead me up something longer, I jumped at the opportunity.

My previous experience, it seems, had mislead me: you mean I don’t have to be dating someone for them to want to take me on long climbs? Single ladies (and dudes), take note. (Better yet, just get good enough to be the one taking people up long climbs…I’m working on it, ok?)

In my excitement, I momentarily forgot about that heavy piece of gear I always bring with me when I climb: debilitating, irrational anxiety.

The night before the climb, I checked and re-checked my gear. I made sure I had lots of food. (Bringing lots of food seems to be my coping mechanism in the face of mountain-related anxiety. I can’t control whether or not I am crushed by a giant rock, or the rope snaps, or friction ceases to work, but I can damn well make sure I have enough beef jerky on hand). I trawled the Facebook page of the guy who would be my climbing partner, in an effort to ascertain whether or not he was normal. Or at least, normal enough. (Alpinists are rarely actually normal.)

My worries, which swirled in and out of my consciousness, forming an eddy of generalized anxiety, could be ranked as follows:

1) I would, for some reason, be unable to finish the route, and develop a reputation in Canmore as “the girl who freaked out and bailed”.

2) My climbing partner would be weird/intense, making the long day seem much longer.

3) My climbing partner would do something really unsafe, killing one or both of us.

5) My newly re-soled climbing shoes would either not fit or not stick or both. This did not occur to me until we were at the base of the climb -why did I not think of this earlier and at least TRY the shoes ON? I have no answer. But I did have the foresight to buy a healthy quantity of beef jerky. Priorities.

Notice that dying ranked #3. Again with those priorities.

In the end, none of these things happened. (Except #4: the rockies are, in fact, rocky).

My new climbing partner, who was not particularly weird, turned out to be a rock guide in training, practicing for his exam in September. (Which is a best-case scenario when you’re making an effort, let alone when this is someone you’ve found on Facebook.) He also had the disposition of an elderly dog sunning itself; he was preternaturally calm. On the first pitch, which was actually the first pitch of a neighbouring crumbly, unfinished route (do NOT aim for the fixed line!), I pulled nearly half the mountain down in handhold-sized rocks -rocks which my new friend had neatly avoided. When I arrived, traumatized, at the anchor, he smiled pleasantly and offered a mild, “It’s a bit loose, hey?” before executing a leisurely traverse to the anchor next door. 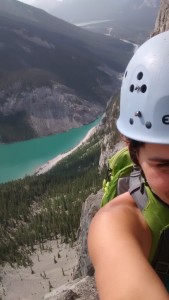 I tried an anchor selfie. It sort of worked.

My shoes fit, and stuck to the rock as one would expect. There were solid bolts at all the anchors, and while I was pretty tired by the 10th pitch, my climbing ability did not mysteriously evaporate, as feared.

As we made our way up the climb, first the steep scree approach, then the first pitch-that-wasn’t-actually-the-first-pitch, then farther and farther up from the ground, my list of worries re-adjusted itself and #3 took its rightful place at the top. One of the virtues of mountain sports is the way they siphon off anything that doesn’t really matter all that much. I remembered just how high up 300 meters is, and how vulnerable it can feel when the only things keeping you there are a couple of pieces of metal and a stranger with a rope. I forgot all about the beef jerky.

A lot of climbing is learning to trust. There is the obvious: you trust that your gear will hold, that the rope won’t break, that your partner knows what he is doing. These are all things that you have some control over: place good gear, check your rope, choose competent partners. It’s not foolproof -things can still go wrong- but these are risks that can be managed.

There are things, though, that we have no control over: rockfall and inclement weather happen despite our best-laid plans. In the mountains, we are tiny and hopelessly breakable.

Around the fifth pitch of Eeyore’s Tail, as I began to get tired, I realized I was developing emotional attachments to the holds. The problem with finding a nice jug, or a really bomber ledge to stand on is that you can’t stay there. The farther up the climb I went, the more uncertain I became that there would be another good hold. Obviously, this was unreasonable. I knew the grade, knew I could climb it, and I had been moving steadily upwards without a problem for the past 150 meters or so. But anxiety is not reasonable. And faith, which is what trust without certainty really is, is not easy. Life has taught me that faith is not always rewarded. A person you trusted screws up, marmots have chewed your fixed line 100 meters up, your church burns to the ground. Nobody gets too far along in life without having a few beliefs -sometimes big ones- fall apart.

Thing is, there is no alternative. Hanging out in the middle of EEOR forever isn’t an option. In fact, the best option -usually the safest one too- is to keep moving up; keep letting go of that sure-thing hold and trusting that there will be something else to hold onto a little further on. Climbing wouldn’t be possible without a little blind faith. I am finding, despite my best hopes, that to have the fullest possible life might require some of the stuff as well. The world where I am sure about everything is a very small one.

Turns out, on this climb, anyway, there was always another hold. And after 10 pitches, including a surprise 5.4 to finish, we topped out onto a pleasant grassy knoll, to the surprise of a pair of hikers who’d come up the backside. While my new friend coiled the ropes and calmly consumed his sandwich, I took in the view (the view!) and finally tucked into the food I’d lugged all the way up there. Beef jerky has never tasted so good. 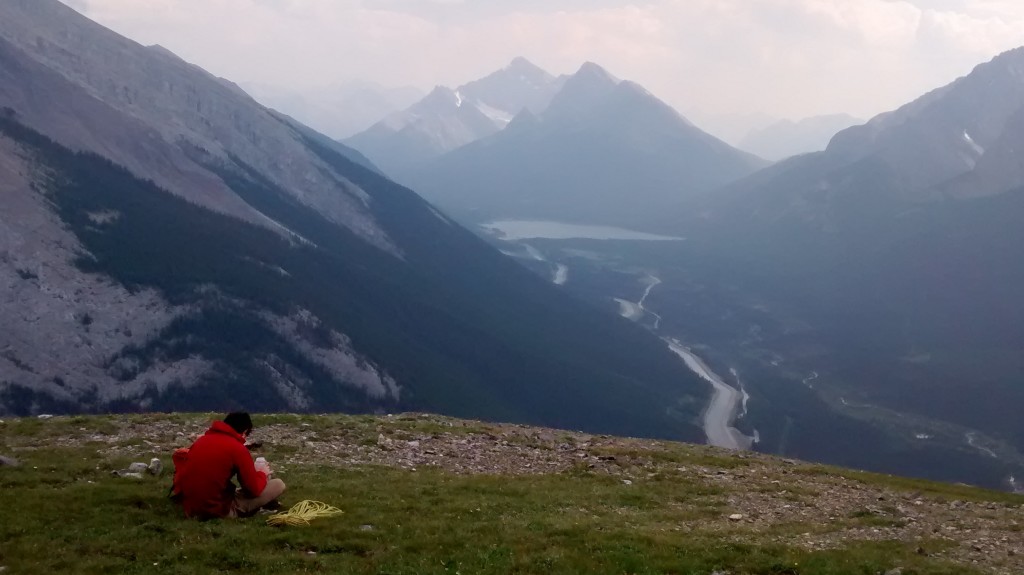 My climbing partner, having a peaceful moment.