A blue bird had been flying ahead of me on the trail for a good few kilometres, flitting to the next branch whenever I got too close. I had come to think of him as my spirit guide, and of myself as some sort of bird-whisperer, like in the Disney version of Snow White, which highlights my mental state at the time.  Suddenly, though, the bird dipped sideways into the trees. He stopped and cocked his head at me, as if to say, “Are you coming?” before continuing on his swoop-land-chirp trajectory through the trees. I halted on my horse-friendly Parks Canada path. This was a consternating turn of events. Obviously, following a bird into the trees was a ridiculous idea. But was it? What if the bird wanted me to follow it? What if it was the wilderness version of Lassie, and someone needed rescuing? I seriously considered this possibility.

I was on the final leg of a three-day solo hiking trip in Banff National Park. I had started at Johnstone Canyon, where a friend had dropped me off early enough in the morning to avoid most of the tour bus traffic. I had quickly lost what remained of the crowds as I climbed towards the moody, imposing beauty of Mystic Pass. Now, trudging through the horseshoe-pocked mud of the Forty Mile Creek Trail, I hadn’t spoken to another human in two days, and it was beginning to show.

Not quite at Mystic Pass.

Reluctantly, I let my little friend fly off into the trees without me. Too late, another possibility occurred to me: What if the bird was actually warning me about something on the trail ahead? I quickly reviewed my mental bear-aware checklist as I felt for the bear spray I had stashed in the hip pocket of my backpack. I could handle a bear. But what if it wasn’t a bear? I held my breath as I scanned the trees for cougars. I didn’t encounter any pairs of glowing orange eyes, but then I realized with a start that if a cougar were going to attack me, it probably wouldn’t be very easy to spot. I picked up my darty-eyed pace and carried out an exhaustive analysis of whether or not I should have followed the bird into the underbrush, until the forest and the sound of my lone, squishy steps chased my half-formed thoughts in a different direction. So this was solitude. 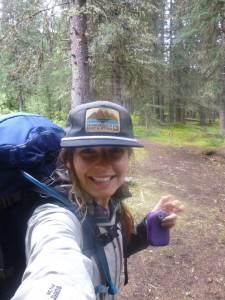 I took a lot of selfies. This is day 3, pre-cougar scare.

I’m not the first person to look for solitude in the wild. Many Native American rites of passage involve a vision quest -a solitary sojourn in a wild place, an active waiting for the dream that will shape your life. Some ancient Christians became desert hermits, wrestling alone with their demons and their human weakness. In the mid-1800s, Henry David Thoreau famously spent two years living in a hut in the woodlands of Massachusetts, in an attempt to get at the essence of life that is hidden under the constructs of “modern” living. Some 150 years later, Chris McCandless tried something similar in Alaska, and never made it back. Most recently, Cheryl Strayed’s “Wild”, a memoir about her solo hike of the PCT, which is actually about coming to terms with her mother’s untimely death, has been reminding us that women can also get on this alone-in-nature bandwagon.

In the days leading up to my trip, the friend who dropped me off at the trailhead and exhorted me to text her when I was safely (and literally) out of the woods, took to remarking that I was going to be, “just like that girl from ‘Wild'”.

First of all, I was not grieving my mother’s death, mostly because my mother is still alive. I did not befriend fellow hikers, mostly because hearing men’s voices from my tent one evening spooked me, so I just…didn’t leave my tent until they left the following morning. Also, I know how to pack for a hiking trip. Ultimately, I spent just three days alone in the wilderness, capped on both sides by the friend who dropped me off and the other friend who picked me up. It wasn’t several months alone in the bush, it wasn’t something vastly different from my previous experience. But still, by day three, I was forming (delusional) spiritual connections with wildlife. I don’t think I’m very good at being by myself. 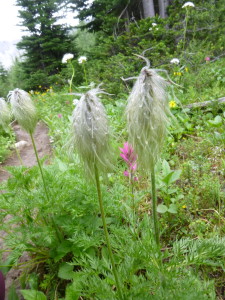 Seriously, though -do these not look like truffula trees?

In the city, I am never alone. I wake up in the apartment I share with a roommate, go to work on public transit, spend all day in classrooms full of teenagers, lug my computer to coffee shops to do my writing, and, if I’m lucky, meet up with friends in the evenings. Even in my relatively sleepy slice of the city, there probably isn’t a time of day or night that I can’t step outside and see another human being. And even if, at 3 am, I go for a walk and don’t bump into anybody, I will be walking amid apartments full of people, and streetlights, parked cars, cats. Evidence that I’m not alone. That I am, in fact, surrounded.

When you’re so used to being around people, the thought of being alone is both scary and exciting. I spent the first day of my trip giddy over being able to do exactly what I wanted. Did I want to have breakfast at the Ink Pots and take a zillion photos of my reflection in the pools? Yes, so I did. Did I want to gnaw on the block of cheese I had brought for dinner instead of actually cooking dinner? I did it. 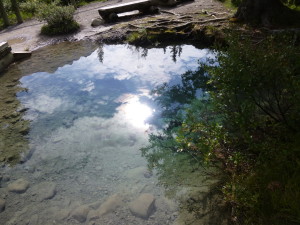 The scary part was not knowing how I would respond to being alone. In my first year of college, I went on a canoe trip down the Buffalo River with my classmates. One morning, our leaders informed us that we were having a morning of silence -no talking at all. We went our separate ways for those few hours and got lost in our own thoughts. And I nearly threw myself in the river. It was horrible. I was afraid of my own thoughts, so I tried not to have any, and the boredom was maddening.

So I was a little concerned, heading into my Banff trip, that I might go crazy. I was also worried about feeling lonely. Occasionally, I startle myself all over again with the realization that all my friends are getting married and having babies and moving away, and who in my neighbourhood would I actually turn to if I needed to borrow a cup of sugar, anyway? But I have been having this realization for years, and I still get to hang out with people I really love ALL the time. It’s possible I’m just really lucky, or not as old as I think I am. When you’re never alone, it’s easy to equate being alone with loneliness. But I think most of what I might consider loneliness is actually just my fear that one day, in the future, I will feel lonely. 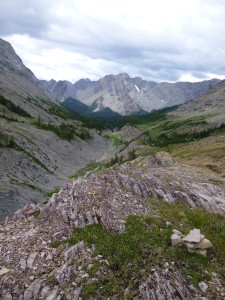 Mystic Pass, in all its empty glory.

When I actually got to be alone? Really, truly alone? It turned out that loneliness didn’t really have anything to do with it. My mind was too interested in all the space it suddenly had to explore -all the silence it was presented with, like a blank canvass, to fill with all the colour it could muster. I thought about my past, my future, the nature of life, and then I moved on, because there wasn’t as much material there as I had expected. I noticed things -the moss on a particular tree, the pest that seemed to be eating away at only one type of plant, the weight and speed of raindrops. I made up stories, and sang a Taylor Swift song over and over again (not my brain’s finest moment). I read a book, which became my only reprieve from myself. 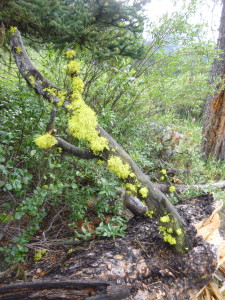 On day one, I was overwhelmed by the amount of blank space. By day three, I was a little bit crazier, but I had also expanded to fill the space -like a gas. I was more comfortable with myself than when I started out.

That’s not to say that I wasn’t ecstatic to the point of religious conversion when I got to the parking lot on my third day, and saw my friend walking over in his trail running gear. It felt a bit like a miracle. Every human interaction that day did. I am made for communion. But a little bit of solitude in a wild place -I might be made for that too.

I wandered lonely as a cloud? Coming down from Mystic Pass.