Thanksgiving weekend has traditionally been my last hurrah of the climbing season. Back when Vancouver had distinguishable seasons (shoulder season, ski season, climbing season), rather than the maybe-it’ll-snow-maybe-it’ll-be-20-degrees-and-sunny phenomenon of the past couple of winters, I would pack my tent and gear into a friend’s vehicle, and we’d all head up to Skaha.

It probably didn’t happen every year (but maybe it did? memory is a fickle, fickle thing), but still, I got used to the crimps, the mountain goat sightings, and stocking up on my Elephant Island fruit wine and bags of apples.

This year,  though, in the spirit of change (and also because half of BC disappeared into a massive raincloud, and also, all my friends have babies now), I headed south instead.

In a triumph of last-minute planning, I headed to Vantage, WA, with a (still baby-free) friend, his girlfriend, her sister, who turned out to be an awesome girl I met last year on a Tofino trip, and a mexican rescue puppy named El Tigre. 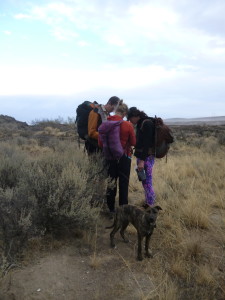 The crew, making some serious decisions (about which direction the climbing might be).

Despite a wind incident that had me hanging out of the tent in the middle of the night, half in my sleeping bag, trying to duct tape a tent pole back together, and losing a draw to the last bolt of a climb that I started in the daylight, but (nearly) finished in the dark, a good time was had by all. 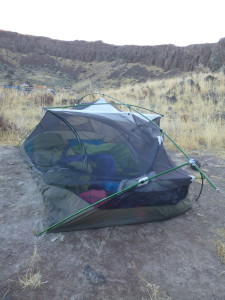 Duct tape, for the win.

In case you’re interested in checking it out (and you should be), here’s the beta.

Vantage is a desert oasis of dry-and-warm, located in the middle of Washington State. It has a population of 70, as of the 2000 census, which means that, when we visited, there were nearly as many climbers waiting to use the only outhouse at the crag as there are actual residents.

The crag is across the highway from the Wanapum reservoir (part of the Columbia river), which looks incredibly inviting when you’re halfway up a 5.10a that definitely feels harder than a 5.10a, getting a sunburn (in October), and trying to preserve water, because there is no water source at the campsite.

For a rocky outcropping on the edge of a reservoir, in the middle of nowhere, Vantage is actually pretty interesting.

It’s not just the columnar basalt, set down as pillars and canyon walls across the desert. Vantage is also home to a petrified wood forest with more than 50 types of (previously) tree, and a series of ancient petroglyphs.

Unfortunately, the creation of the reservoir, back in the ’60s, destroyed hundreds of the petroglyphs and only about 60 were saved, to be “reinstalled” at the visitor’s centre.

Petrified wood at the visitor’s centre. 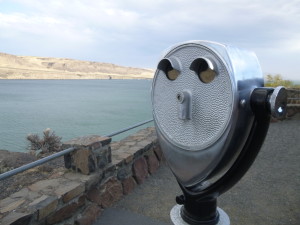 Lookout from the visitor’s centre. 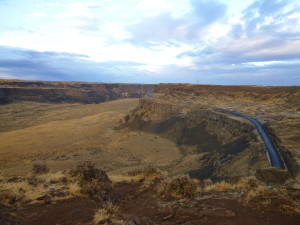 View of the campsite and parking lot, to the right of the highway.

Vantage, or Frenchman Coulee, is made up of a series of basalt columns, stacked closely together in long rows. Climbing at Vantage is mostly single pitch, with a few two-pitch routes kicking around. There’s plenty of sport and trad, with grades ranging from 5.5 to 5.12+ so you can choose your own adventure.

There’s a guidebook out there that, as far as I can tell, was updated in 2008.  We ended up using a downloadable PDF called The Best of Frenchman Coulee, which, along with maps and topos, offers a peppy natural history lesson and pictures of pretty flowers.

1. Basalt columns all pretty much look the same, so finding the climb that matches your topo might prove challenging.

2. On a sunny weekend, this place is packed. You’ll have to get up pretty early if you want to rescue the draw you left behind the previous night before anyone else does. 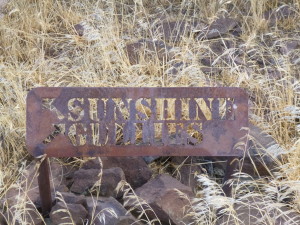 So you don’t get lost (you might get lost). 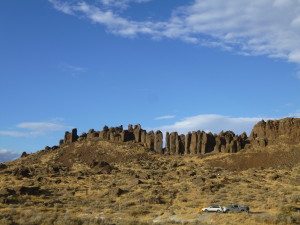 The Feathers, from the campground.

A free campground, in the area south of the Feathers -a 5 minute approach from tent to crag.

An outhouse. One of those fancy permanent ones with concrete and stuff.

A river. For swimming on hot days.

What there is not:

More than one outhouse.

Water. Make sure you bring lots.

Endless cloudy days. It rained once while we were there, for 5 minutes, and then cleared right up.

It’s enough to make a Vancouver girl fall in love a little. 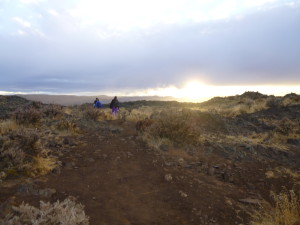 Sunshine, after the 5 minutes of rain we got that weekend.

Wenatchee Outdoors has information about the region, including other things to do, guide books, and access updates.